Texas Guinan – Queen of the nightclubs. 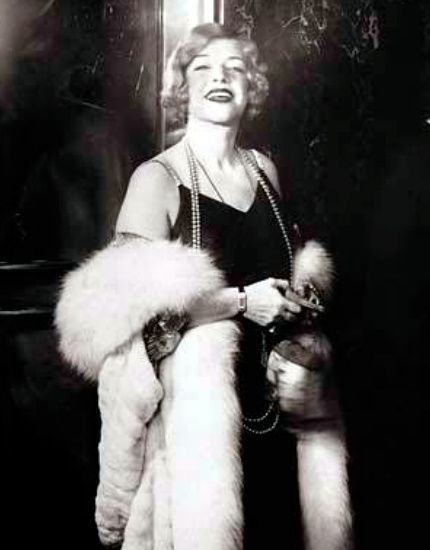 While she wasnt the classic Mob Moll, Texas Guinan was no stranger to the law or mobsters and certainly one of my favorites.

Born in Texas in 1884 Mary Louise Cecilia Guinan, better known as Texas Guinan was a movie star and star of the New York stages. But she is probably best known for being the Queen of the Nightclubs.

She moved to New York and initially found work as a chorus girl and start using the name Texas Guinan, within a year of being in New York she landed the lead in a production called Simple Simon Simple, she accidentally shot herself during a performance. Through the 1910’s she would be a star of the stage and appear in many productions.

She moved to California to start a film career and in 1917 she would star in her first movie, Western movies. Its said that she had the map of Texas on the door of her room instead of her name. Her best known movie The Boss of the Rancho. She set up her own production company and produce a few movies.

Texas Guinan moved back to New York right at the start of the Prohibition Era. Her first job in a speakeasy was singing for which she was paid 50,000. This would propel Guinan into the world of mobsters, bootleggers & speakeasies.

It was her partnership with a bootlegger and speakeasy owner Larry Fay which would cement her place in the showbiz world. Larry Fay offered to feature her at the El Fey club on West 47th Street in Manhattan, it was there she would come up with her famous catchphrase “Hello, Sucker! Come on in and leave your wallet on the bar.”

Its said that whenever the place was raided, the orchestra would play “The Prisoner’s Song” as she was taken away to jail.