Chicago’s Taxicab Wars took place throughout the 1920’s when rival taxi company’s went to war with each other to gain business and to put the other out of business. The Taxicab Wars seen kidnappings, shootings, bombings and murders in open warfare on Chicago’s streets as taxi companies, unions and drivers of the Checker Cab Company and the Yellow Cab Company went head to head.

Motorized taxicabs began to appear on the streets of major cities from the early 1900’s. Hotels, department stores, and office buildings embraced the new taxicab, but often dealt with a single cab company. Kickbacks were common, and the system favored larger operators, who had the financial resources to “play the game”. 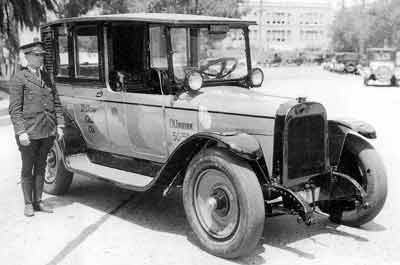 Knowing that the tactics used previously on other cab companies wouldnt work on Checker Cabs, Hertz used a different tactic, being friends and a political ally of Mayor William H. Thompson, amendments were made to the Cab Stand Ordinance Act, this was used to grant almost immediately permits for Yellow Cab drivers, while delaying for long periods granting permits to Checker Cab drivers. This created a hostile atmosphere in the taxi business and labor issues. 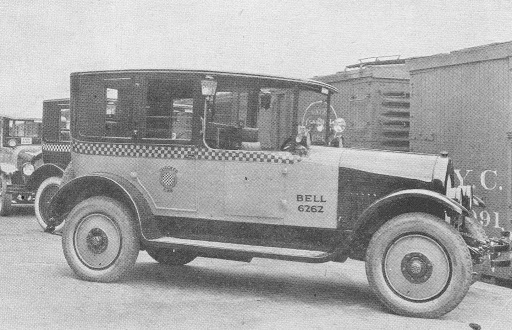 Some say after months of tensions and the odd outbreak of violence, the taxicab wars tipped over, according to the Chicago Daily Tribune, on July 29th 1918 when stink bombs “which distributed a most pungent and overmastering odor” are thrown “with great liberality” on Wells, Madison, La Salle, and Randolph Streets. The last stink bomb sends guests in the Sherman hotel “into the open air with tremendous alacrity.”

As the competition between the Yellow Cab Company and Checker Taxi became fierce and frequently violent with a number of shootings and deaths which peaked in 1920 and revitalized in mid-1921.

According to the Associated Press in July 27, 1920, A major battle between rival taxi drivers took place on the Westside of Chicago, fleets of taxicabs were maneuvered through the streets similar to the best strategy of tank warfare while the taxi drivers fired hundreds of shots at each other, the battle raged into the early morning hours.

Apparently a fist fight between drivers of rival companies initially sparked the battle, soon the action began when a lone taxi moved on a garage of one of the companies, occupants of the lone taxi fired into the garage, gunfire was returned from the garage as the lone taxi was driven off. Minutes later around a dozen cabs, in close formation, roared by the garage of the rival company, with the occupants of the taxi’s opening fire with pistols, cracking like machine guns. The garage defenders replied with several volleys, and sent a fleet of their cabs in pursuit, with another rival garage being attacked by a patrol of three cabs.

While these major battles were being fought, numerous individual battles broke out between drivers, who spent the night and early hours racing their taxicabs from hub to hub, emptying their pistols at each other at close range. Amazingly there were no casualties but only three arrests were made. 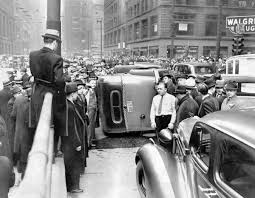 Throughout 1920 battles and skirmishes raged throughout Chicago, on the 7th of August, random gunfire wounded two drivers. On August 20th a taxi driver was shot and wounded during an evening where dozens of taxis had been jockeying for positions in front of a cabstand in the theater district, taxis from rival companies began ramming each other as tensions flared. By the end of August there were ten casualties, September saw bombings and arson destroying many taxis.

The taxicab war continued well into 1921, when P. A. Skirven, a Yellow cab driver, was shot and killed, police believed that men connected with the Checker company did the shooting. Skirven was standing in front of the Yellow Cab stand at Roosevelt road and Kedzie avenue talking to several chauffeurs when a large car, believed to have been a Stutz, sped past, three of the occupants of the auto opened fire with revolvers. Over twenty-five shots were fired at the men standing on the sidewalk, one striking Skirven in the left side above the heart.

During the night there were at least four other shootings, two of the shootings reported passengers were said to have been caught up in the gunfire. The Yellow Cab company offered a reward of $5,000 for the arrest and conviction of the killers of P.A Skirven.

In the aftermath of the warfare Alderman George M. Mapole and Joseph O. Kostner introduced a resolution calling on Chief of Police Fitzmorris to keep both the Yellow and Checker cabs off the streets until such time as they can guarantee to quit fighting. In 1921 a grand jury investigation into the increasing violence between taxi companies in Chicago, the investigation also determined that favoritism, cronyism, and outright corruption were contributing to the escalation of violence. Tensions seemed to simmer down, for a while at least, until 1923 when the warfare erupted again.