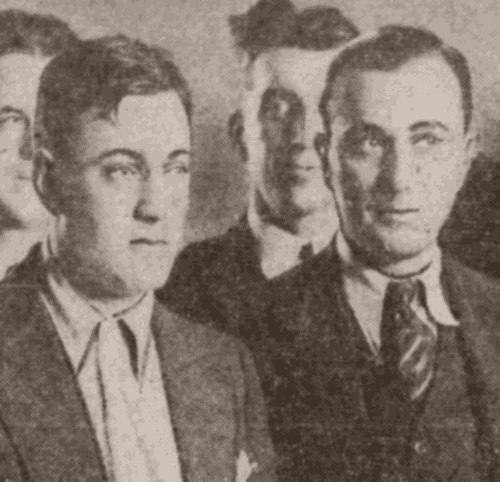 After a bloody gang war with Vincent “Mad Dog” Coll and his gang, Arthur Flegenheimer or Dutch Schultz as he is better known was nervous, its said that the only person to have given Schultz the jitters was “Mad Dog” Coll, so much so that Schultz even moved out of his home to a safe house, a luxurious apartment on 5th Avenue under the name Russell Jones.

Assuming they were Vincent Coll gangsters there to take him out, Schultz and Iamascia drew pistols and charged at the men. Their targets turned out to be New York City Police Detectives Julius Salke and Stephen DiRosa.

Seeing their approach, Salke shouted, “We are the law!” Schultz responded by spinning about, tossing his weapon in the street and attempting to escape. Salke fired a shot into the air, convincing Schultz to surrender.

Iamascia was slower to respond, and it cost him his life. As he continued to advance, Detective DiRosa fired a shot into his midsection, he died later in hospital.

The detectives, working on a tip-off earlier in the day were staking out the apartment of Mr. Russell Jones, Schultz was relieved to find that they were detectives and not a Coll hit squad. “Jesus, I’m glad youre cops, for a minute, I thought you was the opposition, out to gimme the works” Schultz said.

After he began to relax Schultz did what was natural, he attempted to bribe the detectives, he put his hand in his pocket and pulled out a roll of dollar bills to the amount of $18, 645, but detective DiRosa was having none of it and Schultz went to the 104th Street Station house for booking. However, Schultz upped the bribe to $50, 000 each and house’s in Westchester, a much sought after address again the detectives refused and proceeded to book Schultz, he was let out on bail which was set at $75,000 and faced 20 years in jail.

At the trial the NYPD heard a rumor that Coll and his gang were planning to kill Schultz during the trial, a ring of steel was put around the courthouse. The police chief inspector John J. Sullivan picked forty heavily armed detectives, all of who had knew Coll from their duties and ten uniformed policemen patrolled the inside of the courthouse expecting trouble.

Police searched cars outside the courthouse, and questioned visitors at the entrance’s to the courthouse they were instructed to no let anyone in that had a connection with the Schultz case, if they were in doubt detectives would escort the visitors to the room they had business in and were satisfied that they were legitimate visitors. Detectives patrolled the corridors and even went as far as to have undercover detectives dressed as workers and cleaners in the advent a Coll gangster slipped through.

Inside the courtroom Schultz was looking very nervous, the death threats from Vincent “Mad Dog” Coll had made him nervous. Taking some comfort in the fact that he was surrounded by police, Schultz wouldnt leave the courtroom until he was escorted by police, when he saw some intimidating looking men huddled together, he stood back until he was reassured that the men were in fact plainclothes detectives.

Schultz would live to fight another day, however Vincent “Mad Dog” Coll would soon find himself at the receiving end of a gunman’s Tommy Gun