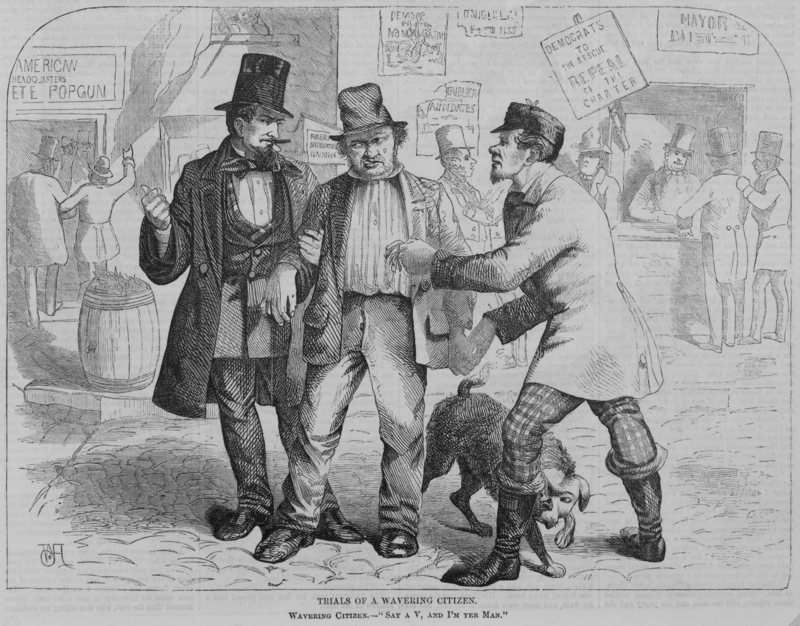 During the 1850s, political clubs with names like the Plug Uglies, Rip Raps, American Rattlers, and Blood Tubs formed in Baltimore, Maryland which earned it the nickname Mobtown largely due to the intimidation, riots, and murder.

This was mainly due to Irish & German immigration into the city from the 1830’s to 1860’s. The new arrivals were often desperately poor, cluttering the housing, hospitals and jails. Worse still, from a native perspective, many were Roman Catholic. The Irish, in particular, were seen as drunken, belligerent foot soldiers of a corrupt Pope.

Baltimore’s patchwork of neighborhoods provided the perfect setting for confrontations between natives and newcomers. Most common were what observer Thomas Scharf called “the ordinary acts of riot and intimidation”.

Yet the riots, intimidation & mayhem paled in comparison to election season. Election rallies were massive provocations mixing Fourth of July pageantry with thuggery. Because the party that ruled the streets usually did well at the polls, partisans regularly marched through opposing wards. They also infiltrated opposition rallies, where they threw the crowd into disarray by jabbing bystanders with a shoemaker’s awl, an awl was similar to a short ice pick and easily concealed.

So beloved was the lowly awl that shortly before the presidential election in 1859, the political clubs hired blacksmiths to forge them en masse to hand out among its members. At the polling places, the Plug Uglies strapped awls to their knees, surrounded suspect voters and “awled” them into retreat. “Come up and vote; there is room for awl!” became one of many election-time chants intended to amuse and intimidate.

Not content to just intimidate the opposition voters, the nativist gangs also sought to get as many votes as possible for their own candidates. A favorite strategy was “cooping.” For days before an election, Scharf writes, “honest gentlemen as well as unfortunate wretches,” would be abducted by the gangs and transported to cellars or sheds, “coops”, where they would be held under conditions described by one victim as “disgusting and horrible in the extreme.” Sometimes forced to drink large quantities of whiskey, the hapless captives were invariably robbed and beaten before being transported to the polls in small groups to vote, and vote again.

Peter Fitzpatrick testified that he was kept in Plug Ugly Raz Levy’s coop, where he recalled that a fellow captive in 1858, John Justus Ritzius recounted being forced to vote sixteen times in several wards.

Described as “pitch battles” involving hundreds of fighters, Baltimore riots ranged far and wide, shifting from ward to ward. With picks and axes, combatants dislodged cobblestones and bricks for ammunition. Each election season between 1854 and 1858, a dozen or more were killed, with Scharf estimating 1856 casualties to number 30 dead and 350 wounded.

The Know Nothings enjoyed political victories in other states as well, but their ascendance was short-lived. They were never able to unite under a nativist consensus.