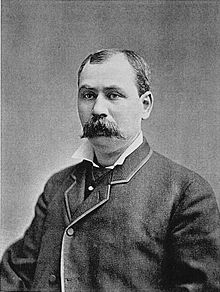 Thomas F. Byrnes was an Irish-born NYPD officer, who served as head of the New York City Police Department detective department from 1880 until 1895. Byrnes gained national attention for his exploits and some credit him with the technique “The Third Degree”

Born in Dublin, Ireland he immigrated to New York as a child with his parents James and Rose Byrnes. He worked as a gas-fitter until the start of the Civil War when he enlisted in 1861 and served two years with that unit. After his service, Byrnes became a firefighter, joining Hose Company No. 21 in New York City. He remained as a firefighter until December 10, 1863, when he was appointed a police officer.

Byrnes first started out as a patrolman and became a sergeant in 1869 then promoted to captain in 1870. He gained a reputation through his work and by helping to solve the Manhattan Savings Bank robbery of 1878. The Savings Bank robbery was carried out by some of the most serious criminals of the day Thomas “Shang” Draper, George Leonidas Leslie and Fredericka “Marm” Mandelbaum among others.

He became the NYPD Detective Bureau chief in 1880, a role which would bring Byrnes national distinction. He managed to increase the detective force from 28 to 40 men. In four years the Detective Bureau made 3,300 arrests, after which he would obtain legislative approval to make changes in the department which would give him immense power.

Another notable achievement came in 1886 when Byrnes came up with the idea for the “Mulberry Street Morning Parade” of arrested suspects before the assembled detectives in the hope they would recognize suspects and link them to more crimes. He was also credited with the idea of a book of photographs of criminals which was called the “Rogues Gallery”, which could be described as a modern day database for known criminals.

But for all of Byrnes achievements he was known for his brutal style of questioning suspects which was given the name “the third degree”, which was apparently coined by Byrnes. From the descriptions, the third degree, practiced by Byrnes was a combination of physical and psychological torture.

In 1895, the new president of the New York City Police Commission & future President of the United States Theodore Roosevelt, compelled him to resign as part of Roosevelt’s drive to rid the force of corruption. Byrnes became an insurance investigator, opening a detective agency on Wall Street. Thomas F. Byrnes died in 1910