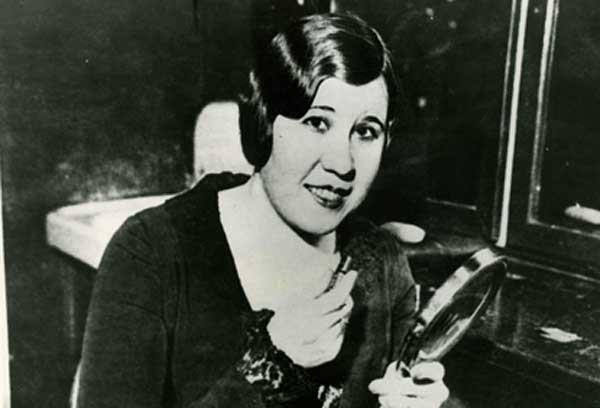 Alice Kenny Diamond was the wife of Jack “Legs” Diamond.

Alice Diamond put up with a lot when married to Legs, she had to put up with his living with Kiki Roberts, a dancer, for a while. She moved around with him while he was on the run, sit with him through court cases and of course worry and sit with him after one of his many shootings and trips to hospital.

After Legs was eventually shot and killed, Alice had to deal with the financial worries of the funeral though its not really clear how the funeral was paid for, some say Owney Madden put up the money others say one of the newspapers paid for it and also got exclusive photos.

Alice moved back to New York when Legs died, she did get some work as a sideshow on Coney Island but the run didnt last long. She also was able to finance a small business. But it wasnt the life she had been used to while Legs was alive.

On July 1, 1933, Jack’s widow, Alice Kenny Diamond, was found with a bullet to her left temple at 1641 Ocean Avenue in Brooklyn. It was speculated that she was shot by Jack’s enemies to keep her quiet and others say that she may have committed suicide.

There were three cups of coffee on the table, indicating that Alice had welcomed her callers, and police let it be known that an expression of disbelief was frozen across her dead face. It was theorized for a time that she might have been ready to come forward with information about Legs’ death and accordingly been silenced. More probably, as it turned out, she had merely overheard too much about a petty neighborhood killing. There were suspects, but nothing was ever pinned on an actual perpetrator. Alice was buried with her beloved husband “Legs” at Mount Olivet cemetery in Queens.