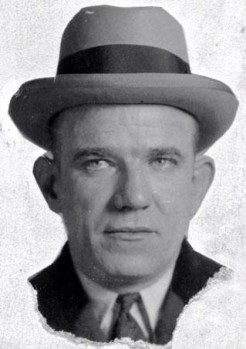 Michael “Mickey” Duffy also known as John Murphy and George McEwen, was a Polish-American mobster and rival of Maxie “Boo Boo” Hoff during Prohibition. He became one of the most famous and powerful beer bootleggers in Philadelphia.

Born William Michael Cusick to Polish immigrants in Grays Ferry, Philadelphia, he changed his name to fit in well with the Irish gangs in Philadelphia. Duffy became involved in petty theft and other crime during his youth before more serious crimes during his teenage years, including armed robbery and hijacking prior to entering bootlegging during Prohibition.

His was first arrested in 1908 and throughout his lifetime he would serve jail time for many different offences including a three year stint at the Eastern State Penitentiary for assault and battery with intent to kill. When he was released from Eastern State Mickey easily found his way in the world of booze smuggling, bootlegging and brewing.

By the early 1920s, Duffy had become one of the most dominant bootleggers in the Delaware Valley possessing breweries in Philadelphia, Camden, and South Jersey.

His associates included former rival Max Hassel, Harry Green, James Richardson, Charles Bodine and Nicholas Delmore although he would be in frequent battle against rivals such as Hoff and the Bailey brothers throughout the decade.

Following the death of John Finiello, an agent of the Bureau of Prohibition killed during a September 19, 1930 raid on one of Duffy’s breweries in New Jersey, local authorities began cracking down of Duffy’s criminal operations causing some animosity among his partners including his bodyguard and chauffeur Joseph Beatty.

While staying at the Ambassador Hotel in Atlantic City, Duffy was shot to death by unknown assailants on August 31, 1931. Although the case remained unsolved, it was suspected by authorities at the time that the alleged assailants may have been associates who had been disgruntled with Duffy and had conspired to seize control of Duffy’s bootlegging operations.