Big Tim Sullivan – As corrupt as the rest of Tammany Hall

Big Tim Sullivan was just as corrupt as you would expect from Tammany Hall whose influence back then reached deep into the corners of city government. Big Tim Sullivan along with his brother Paddy “and a truck full of Sullivan cousins” controlled everything, including the jobs, below 14th street of the Lower East Side of Manhattan.

Timothy D. Sullivan, known as Big Tim Sullivan or Big Feller, was one of the city’s most powerful politicians in the first decade of the 20th century, his influence in New York was much bigger than his formal titles, state assemblyman, congressman, state senator suggested. His most notable achievement was an Act of Government that would bare his name, The Sullivan Act.

Born and raised in the notorious Five Points neighborhood, his parents immigrants themselves from Kenmare, County Kerry, Ireland, where New York’s immigrant poor lived in squalid tenements and among the criminal enterprises that usually accompany poverty. He was often accused of profiting off his constituents, mostly in the form of kickbacks from hundreds of saloons and gambling halls, in some of which he held interests, around the Five Points. Big Tim was also said to benefit from the booming prostitution rackets of the Lower East Side, which were controlled by a Jewish racketeer and friend of Big Tim named Max Hochstim, although Big Tim Sullivan had many criminal friends.

Tim Sullivan was more than just a run of the mill slum politician with criminal connections. A key to Sullivan’s success was the quality of the services he provided to his constituents. He really did actually care for his loyal voters in a very personal way, for example by bailing them out of jail or by giving desperate mothers money to buy food for their children. He hosted immense Christmas dinners at which potato salad and turkey were on the menu. His Labor Day “chowders” — extravagant boat rides to amusement parks — were the talk of the town. He helped finance popular entertainment, including sports and motion pictures.

Apart these mundane ways of winning the hearts and minds of his constituents, Big Tim Sullivan was also a statesman. He was backed by Tammany Hall in 1886 as a candidate for the State Assembly when he was only twenty-four, Sullivan won and immediately made a name for himself as an exceptionally astute politician.

The speeches he made in his native Bowery tongue to the politicians sitting in the legislature sometimes brought them to tears. “He holds the lower house by the throat,” the Brooklyn Eagle wrote in 1891. “Some of the members of the assembly are afraid to cross his wishes for fear he’ll use his fists, others acquiesce in his desires because they are afraid of his sharp tongue.” In 1893, Sullivan was elected to State Senate, and except for a brief stint as a U.S. congressman, kept his seat there for the twenty years, working on legislation, some of it aimed at bettering working conditions. This cause was one of his passions.

Big Tim Sullivan, like his predecessors in Tammany Hall was an expert in using election fraud to gain and retain power. In a mutually beneficial agreement, his constituents voted the way they were instructed to vote and in return they were the recipients of Tammany’s benefits which included coal in the winter and outings in the summer, jobs on the city payroll and all-around assistance.

The most common tactic was to use “repeaters” or repeat voters. Here’s how it is described in the book Rothstein by David Pietrusza. Pgs 53-55: “When you’ve voted’em with their whiskers on you take’em to a barber and scrap off the chin-fringe. Then you vote’em again with side lilacs and a mustache. Then to a barber again, off comes the sides and you vote’em a third time with the mustache. If that ain’t enough, and the box can stand a few more ballots, clean off the mustache and vote’em plain face. That makes every one of ’em good for four votes.” 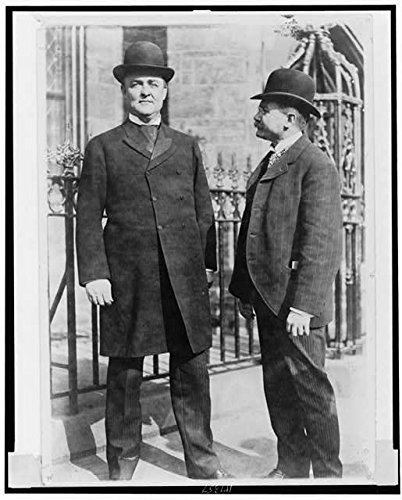 However Big Tim Sullivan’s connections to criminals would be a source of controversy throughout his career, he had connections to some very notable names in the criminal underworld Monk Eastman and his gang, Paul Kelly and the Five Points Gang and Arnold “The Brain” Rothstein and his criminals. During a shake up of Tammany Hall Sullivan and new Tammany boss Charles Francis Murphy forced out a corrupt police chief William Stephen Devery, a drive to clean up the links between the vice districts and Tammany Hall.

Sullivan was allowed to keep his kickbacks and bribes from the gangsters, saloon keepers and brothels from the Lower East Side and Chinatown as a means of keeping him from becoming Charles Francis Murphy’s political rival. In exchange, Sullivan had to see to it that gang leaders Monk Eastman and Paul Kelly gangs commit election fraud on behalf of Tammany Hall. 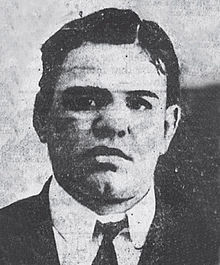 But Sullivan’s life would soon end, with a sudden and shocking decline. The murder of an unstable follower began a steep slide into depression and mental illness for Sullivan. At some point during his career, he’d contracted syphilis, his health continued to deteriorate until he was judged mentally incompetent. In January 1913, Sullivan’s family had him committed to a sanitarium, where he was treated until he was transferred to his brother’s house in the Eastchester section of the Bronx. He managed to escape from his brothers house but within a few hours, his body was found on the tracks in the Eastchester area of the Bronx, New York. Apparently he had been hit by a train but not everyone bought that and his death was surrounded in controversy. 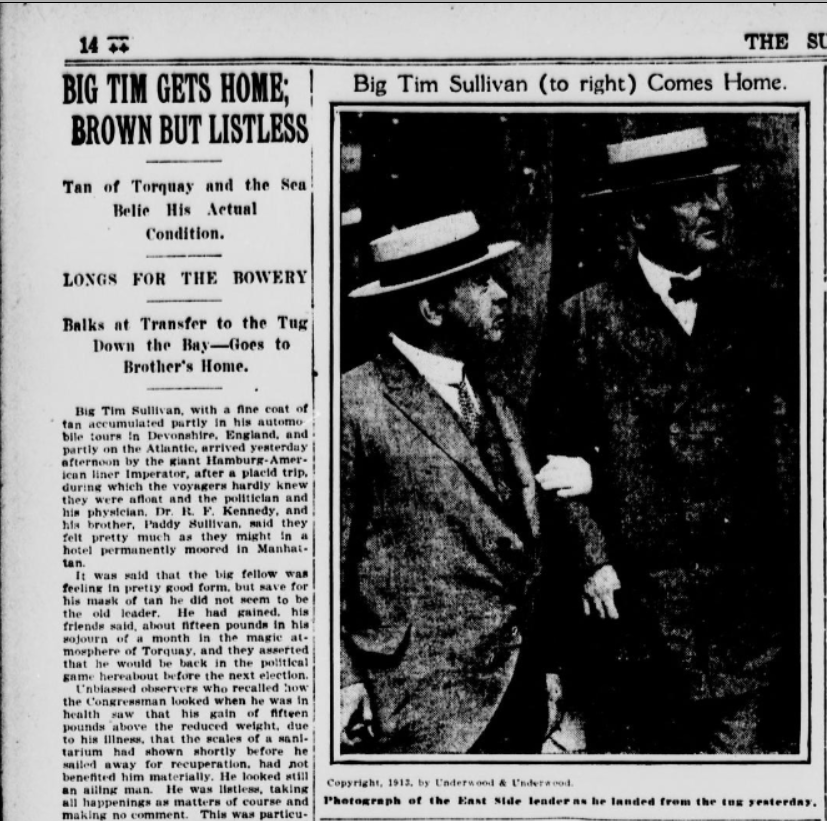 Sullivan’s family did not report him missing for more than 10 days and his body was held at Fordham morgue. Finally, after a fortnight, Sullivan was classified as a vagrant and scheduled for burial in Potter’s Field despite his tailored clothing and “TDS” diamond monogrammed cufflinks.

Just before the removal, his body was recognized by Officer Peter Purfield, who was assigned to the morgue. The New York Times later speculated that Sullivan might have been killed and his body placed on the tracks. The engineer of the train that had hit Sullivan stated that he thought the body was already dead. Adding to the speculation, Thomas Reigelmann, the coroner and a Tammany appointee who had signed the death certificate had failed to recognize the body of his longtime friend despite the lack of trauma to the face.

Sullivan’s wake was held at his clubhouse, located at 207 Bowery and over 25,000 people turned out for his funeral at St. Patrick’s Old Cathedral, New York on Mott Street. He was buried in Calvary Cemetery, Queens, New York. 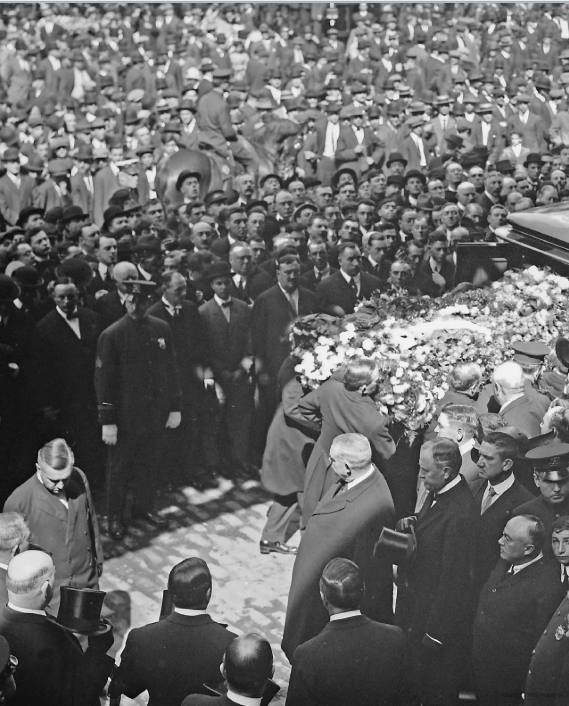 For all of his connections to the underworld one of his legacies was the Sullivan Act, Sullivan introduced the legislation “partly in response to a marked increase in highly publicized violent street crime below Fourteenth Street.” The law required licenses for New Yorkers to possess firearms small enough to be concealed. Private possession of such firearms without a license was a misdemeanor, and carrying them in public was a felony. The law also made it a felony to own or sell other items defined as dangerous weapons, including “blackjacks, bludgeons, sandbags, sandclubs, billies, slungshots and metal knuckles.” 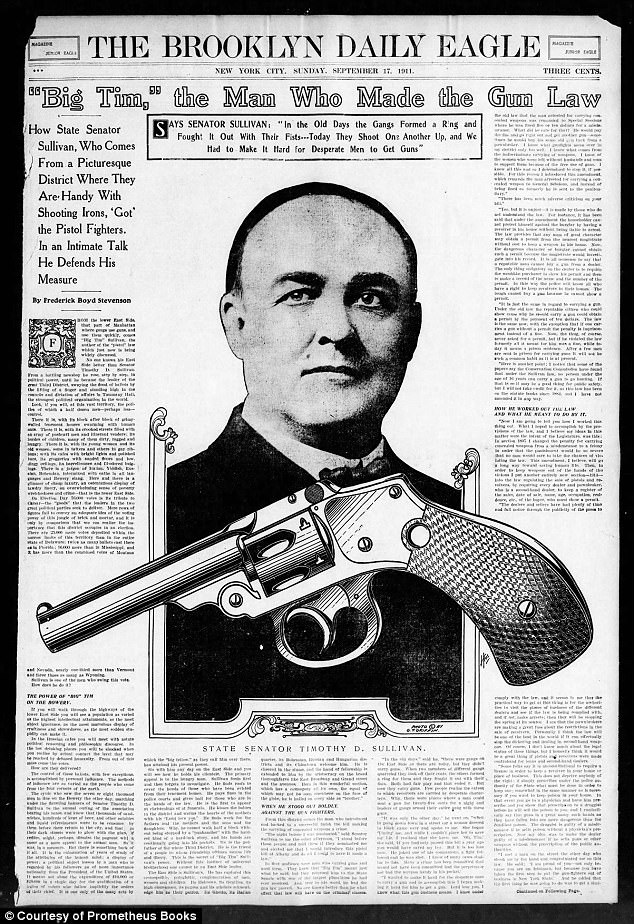