Williamson County in Southern Illinois during the 1920’s was a lawless place, there was the Herrin Mine Massacre where 23 people were killed during a strike, bootlegging and Prohibition were in full effect and this would set the stage for an all out war between hated enemies, future enemies work along side each other to fight a common enemy, the KKK. 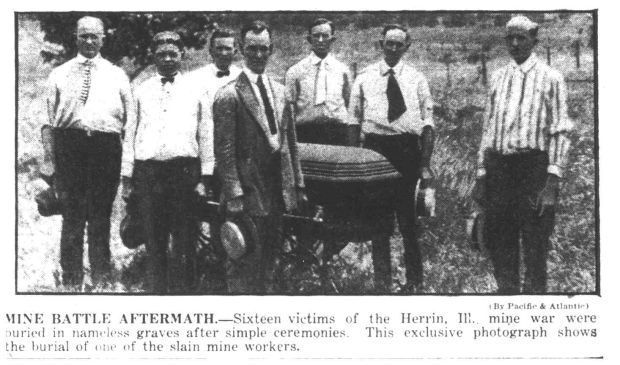 In 1915 the KKK were on the rise again, after being dormant for about 45 years, by 1922 the were increasing in strength. Local, county and state officials were known to be on the take from gangsters or under Klan control and the counties citizens were getting fed up with the authority’s handling of the situation. The lawlessness was a vacuum that the Klan were about to step in and take control of, although briefly.

Paul Angle, the author of the book Bloody Williamson believed that Williamson county provided for establishment and growth of the Ku Klux Klan. The area was predominantly devout Protestant and fervently patriotic. They were also fanatical supporters of Prohibition laws. Herrin, a city in Williamson county, Southern Illinois had a ready-made scapegoat in its immigrant miner community, as these people were “foreigners,” Catholic, and “habituated to wine”; many of them had become bootleggers after passage of the Volstead Act. 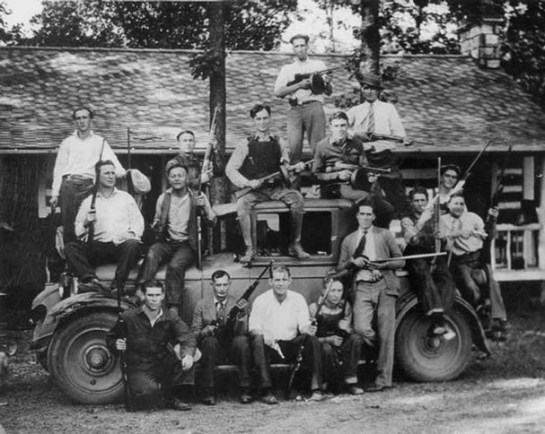 Sheriff George Galligan was seen by some as not enforcing the Prohibition laws, and the Williamson County Law Enforcement League organized to help stamp out bootlegging and gambling, which was run by the Shelton Brothers and the Charlie Birger Gang.

The League publicly announced that other means would have to be found to enforce the law. Many citizens believed that the Klan offered a way to clean up Williamson County.

On May 25, 1923, five thousand Klansmen gathered in an open field near Marion and initiated two hundred new members.  It is apparent that some of the county’s most respected citizens were aligned with the KKK. In Marion on August 20, 1923, with more than fifteen hundred voices “raised in protest against vice and corruption in Williamson County.”

The Klan-controlled Williamson County Law and Order League had met S. Glenn Young, a former member of the Prohibition Unit of the Treasury Department, and persuaded him, probably without much effort, to head the purge of Williamson County.

S. Glenn Young, who would become one of the major leader’s of the Klan in later months, had been a guard at the Lester strip mine and had left only a few days before the tragedy occurred. Young went to great lengths to hide the fact that he had been at the mine. It is also known that the membership of the Klan in Williamson County included large numbers of UMWA union miners. 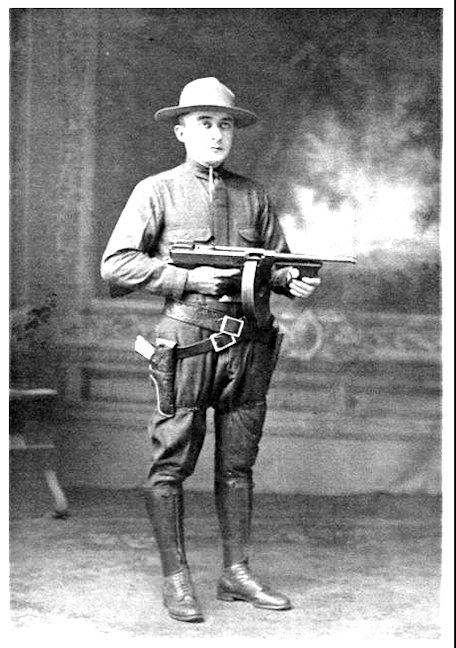 Young’s raids in Williamson County began on December 22, 1923, as he and his deputized Klansmen, accompanied by three federal officers, struck more than a hundred roadhouses in Marion and Herrin as well as bootlegging establishments throughout the county.

Two more mass raids were made on January 5 and 7, 1924, some of them on private homes without warrants. There were rumors of planted evidence, rough treatment, and robberies at the homes of those who were raided, especially Italian and French immigrants, this led to consular agents of both nationalities to protest to the U. S. State Department. 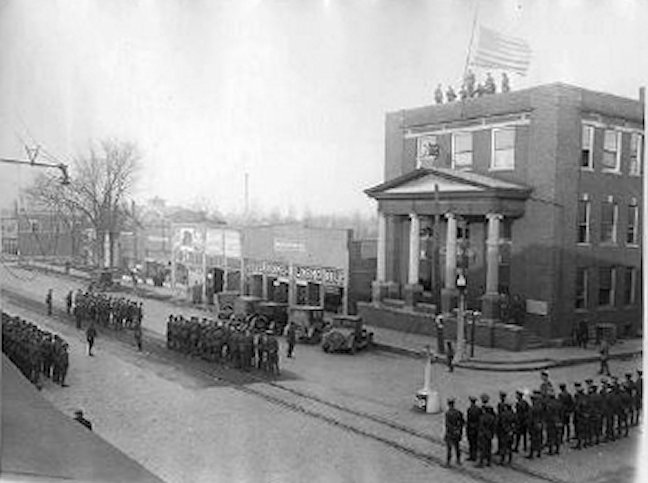 Violence appeared imminent. Sheriff Galligan, in an attempt to restore law and order wired the Adjutant General of the National Guard for troops, despite the protests by Klan, and got them. Sheriff Galligan also attempted to persuade saloon keepers to close voluntarily until danger of trouble abated, but these efforts failed miserably, as did his attempt to disarm Herrin citizens by having gun permits revoked. The sheriff finally agreed to meet privately with any citizen who thought he had evidence of illegal activity and rapidly made eighteen raids of his own, hoping to convince the public that he was sincere in trying to enforce the law. Satisfied that he had regained control of law and order, Galligan agreed to removal of the militia after eight days, and most of the troops left Herrin on January 15 and 16.

In 1923 opponents of the Klan formed their own group, The Knights of the Flaming Circle, membership of the Knights was open to anyone who was anti-Klan and not Protestant, their members included the Shelton Brothers, the Charlie Birger Gang as well as miners, immigrants, bootleggers, and even law-enforcement, who actively began hiring gunmen to join their ranks. It was becoming clear that the KKK were coming after them and their bootlegging business. 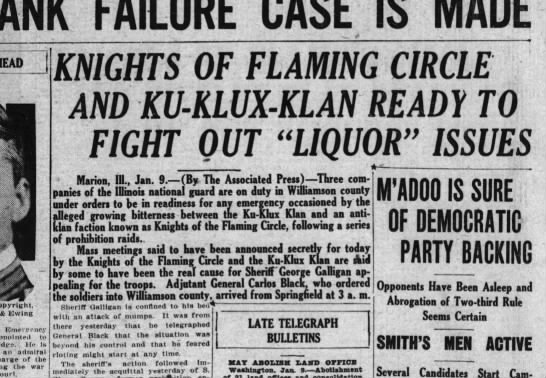 Eventually, on the 8th February 1924 open warfare between the Klan and its opponents broke out in Herrin, an anti-Klansman was wounded and a Klansman was killed. The shooting occurred at an anti-Klan meeting and was blamed on pro-Klan members who had attempted to break in on the meeting.

Sheriff Galligan, fearing a riot was imminent, put in another call for troops and then took the two men to the Jackson County Jail, to keep them from being lynched. While he was gone, the second shooting occurred, Caesar Cagle, a Herrin constable and former bootlegger who had joined the Klan, was shot and died at a Herrin Hospital. It was later determined that members of the Shelton gang were responsible for the shooting.

As word of Cagle’s death spread, hundreds of Klansmen gathered in Herrin, setting up patrols at the city limits. A Klan cordon was set up, occupants of cars were questioned and if they did not have a Klan password they were prevented from entering, armed Klansmen were patrolling the streets and organized a siege of the hospital, where the injured anti-Klansman was being held, blasting the building with gunfire. Patients inside the hospital were forced to lay on the floor to escape the bullets. 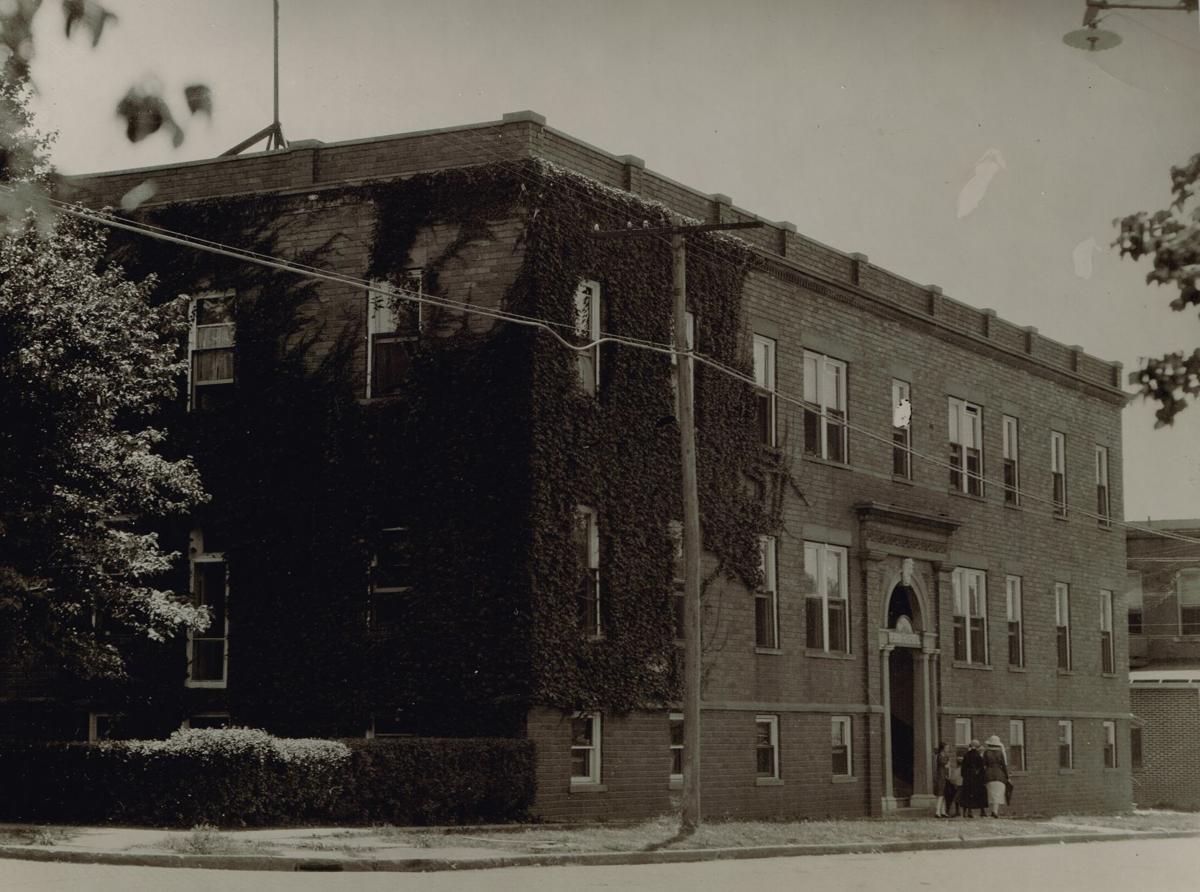 Glenn Young declared himself acting chief of police, as the real chief was already in jail, and had armed Klansmen wearing stars cut from tin cans patrolling the streets. Young had Mayor Mage Anderson, Sheriff Galligan, and thirty-eight other people arrested for the killing of Caesar Cagle. A coroner’s jury ruled that the death of Cagle had been at the hands of Carl and Earl Shelton. A special grand jury, in session at Herrin, indicted the Sheltons on March 14. The jury also listed ninety-nine indictments of Klansmen who had participated in the firing on Herrin Hospital.

Glenn Young left town as the Klan were becoming tired of his antics, he would later be expelled from the Klan because Young was too boisterous, reckless, and violent. Later that month there was an attempted assassination of Glenn Young and his wife, they were fired at from a passing car. His knee was shattered, while his wife was blinded by shotgun pellets, most of which she took full in the face. Klansmen in Williamson County vowed to avenge the attack and assaulted two men seen in a car like the assailants had used. One was killed, the other slightly wounded.

Over the next few months, the Ku Klux Klan and Knights of the Flaming Circle resumed their hostilities, on August 30 six men were killed in a clash between the two factions at Smith’s garage in Herrin, which was known to be a Klan headquarters. Three Klansmen, a sheriff’s deputy, and two passersby, one of whom had tried to play the role of the peacemaker died. A riot was only avoided by the speedy arrival of the National Guard. 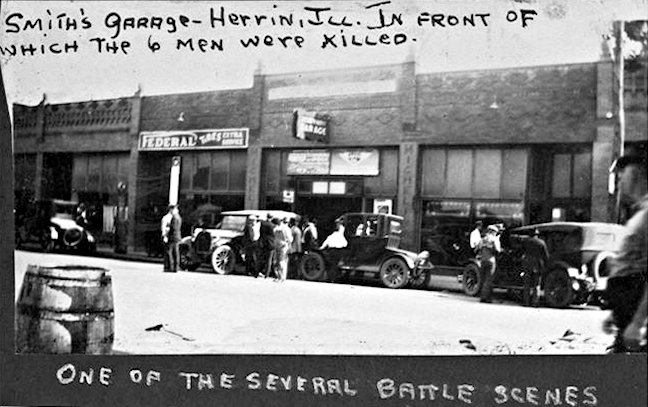 Sheriff Galligan dismissed two deputies from his force when he discovered they were Klansmen and appointed in their place anti-Klansmen. One of these new deputies was Ora Thomas. Ora Thomas was believed to have been one of the original members of the Knights of the Flaming Circle; and at the time of his appointment as deputy he had thirteen indictments against him for anti-Klan activities.

On January 24, 1925 Ora Thomas went to a cigar store, he heard loud voices in the back room, so he entered with one hand on the gun in his pocket. There were several men gathered watching Glenn Young question a miner. Spotting Thomas, one of the group slipped out through a rear door. His action alerted Young, who then turned to face Thomas. In the gunfight that followed, four men were killed, both Young and Thomas and two of Young’s personal guards. The National Guard were called in to Herrin again. 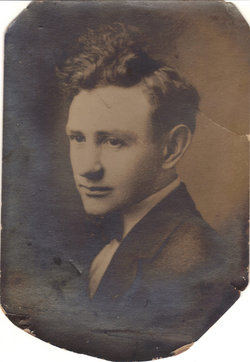 Glen Young’s funeral was an extravaganza with a church full of flowers and a long cortege; the service was concluded by reading of the Klan burial ritual by the light of a burning cross.  It was followed by an enormous procession of Klansmen in full Klan regalia down Herrin’s streets. Ora Thomas funeral however, was a much smaller affair, it was held in his garden and his wife refused to ask the minister to officiate as he was a known Klan member. 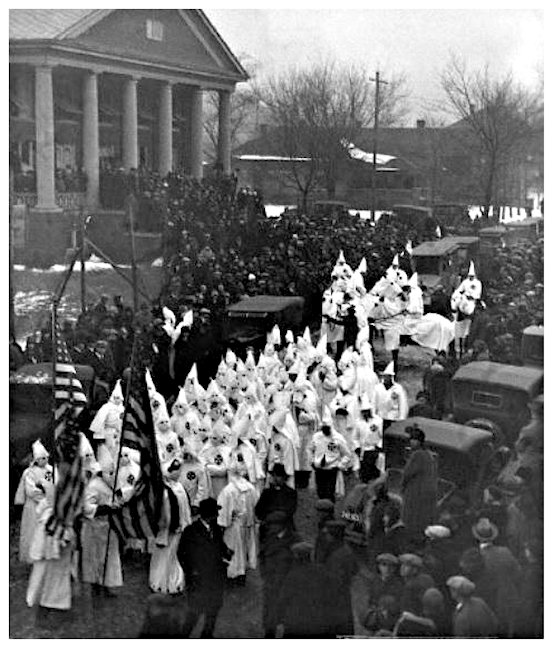 The Klan was practically dead at this point, except for a final confrontation, which resulted in six more deaths and brought the total number of deaths during the Klan era to fifty-two. It occurred in April, 1926, and was primarily spurred by the realization that the Ku Klux Klan still had a remnant of power.

During elections on the 13th April the trouble began when a Klan poll watcher offended anti-Klansmen by challenging a number of Catholic voters, including a nun who had lived in Herrin for twenty years. A fist-fight erupted at the polling place, and the watcher retired to his place of business, Smiths garage where the killings of August 30th had occurred. When he emerged later in the afternoon, his neck was grazed by a bullet fired from a passing car. Firing then began from the European Hotel, two blocks away, and the garage was riddled, although no one was hit. Shortly after the gunfire subsided, the National Guard arrived.

With the National Guard on the streets of Herrin, the anti-Klansmen drove to another polling station and fired on another Klansman. The bullet missed but the man’s face was burned by powder from the charge. That shot was followed by a barrage of gunfire in which one anti-Klansman was killed and two others were mortally wounded, as were three members of the Klan.

With the Klan finished in Bloody Williamson the violence didnt stop as one time allies turned their attention to each other and Bloody Williamson would become a warzone with homemade tanks on the streets, bombs dropping from the sky and murder and mayhem continued.