Charles Vannie Higgins was born in 1897 and is generally regarded as the last Irish Boss of Brooklyn, he was born in the Bay Ridge area in Brooklyn. He built up a successful bootlegging operation but he was never really considered a big time mobster, he has almost faded out of memory in terms of recognition but during his time and for a time after his death, he was well known even having a comic book written about him at a time when mobsters were very much socially accepted. 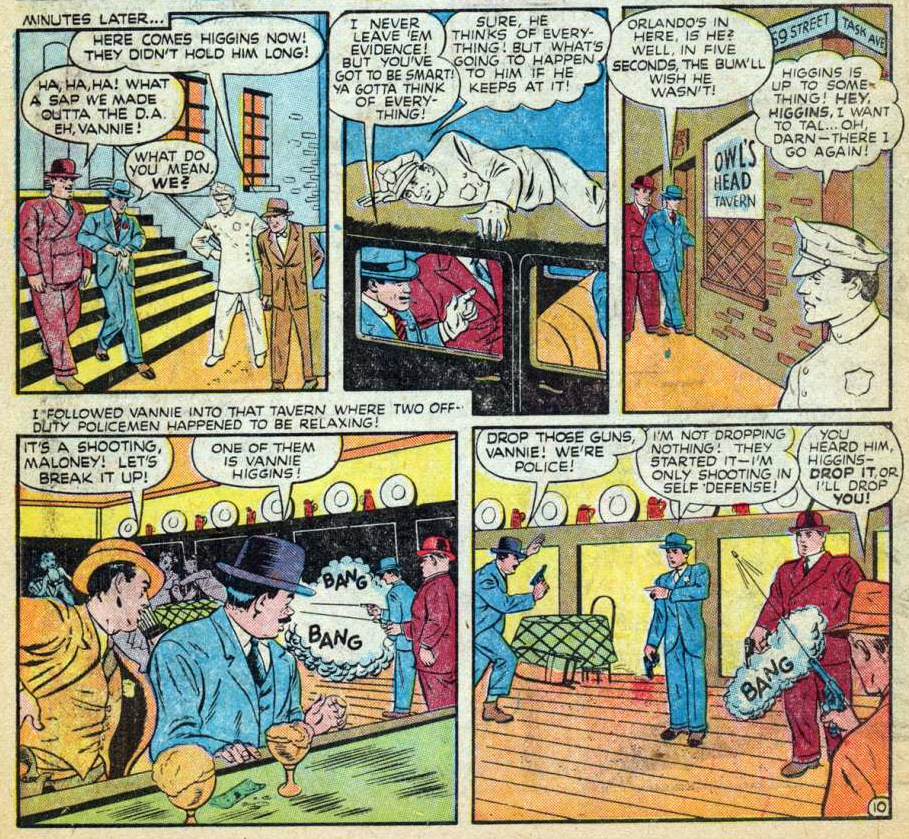 He was first arrested for assault when he was 17 years old in 1915 for which he received a years probation, and again in 1916 he received the same for a similar crime. It would be another 10 years before he would be caught or arrested again, however he didnt stay in custody for long, a quick phone call to his lawyer was usually enough to make sure he was out just as quick.

When the Prohibition Era began, in the years between 1920 & 1927 Higgins worked with another big time bootlegger “Big Bill” Dwyer, who was also partners with Owney “The Killer” Madden. In those years Higgins built up a bootlegging operation including a fleet of taxi’s to transport alcohol and customers, trucks, boats, he owned a boat named Cigarette which was regarded as the fastest rum-runner in New Yorks waters, Higgins even owned a sea plane and also held a flying license.

As Higgins was one of the few gangsters to actually have a flying license, he made good use of it, in one flying trip he went to see a childhood friend of his, Joseph Wilson, Wilson was the warden of Great Meadow prison in Camstock, New York. Its said that in preparation for Higgins visit, Wilson ordered prisoners to clear a field next to the prison so Higgins could land his plane, when this was discovered by then New York Governor Franklin D. Roosevelt, he demanded to know why Wilson was consorting with a character like Higgins, Wilson replied that he had known Higgins for years and it was merely a social call, Wilson also indicated that the governor should mind his own business.

Though Vannie Higgins was considered to be a boos, he certainly wasnt afraid to get his hands dirty. Vannie Higgins first came to public attention after a shooting in the Owl’s Head bar in Brooklyn where over 50 bullets were fired, an off duty police officer, Daniel Maloney was killed, Maloney it turned out moonlighted as a bodyguard. The shooting was said to have happened when a rival bootlegger entered the bar and insulted Higgins, his wife and friends. In another incident in a bar in Manhattan, the bar happened to belong to the brother of the man who was suspected of shooting Arnold Rothstein. Whatever happened in the bar, no one knows but Higgins went to hospital with four stab wounds and when asked who did it he replied “he had no idea who would do a thing like that”. However, the man police suspected of stabbing Higgins, Bob Benson was found shot dead outside a restaurant in Little Italy some time later, Vannie Higgins just happened to be inside the restaurant at the time of the shooting. 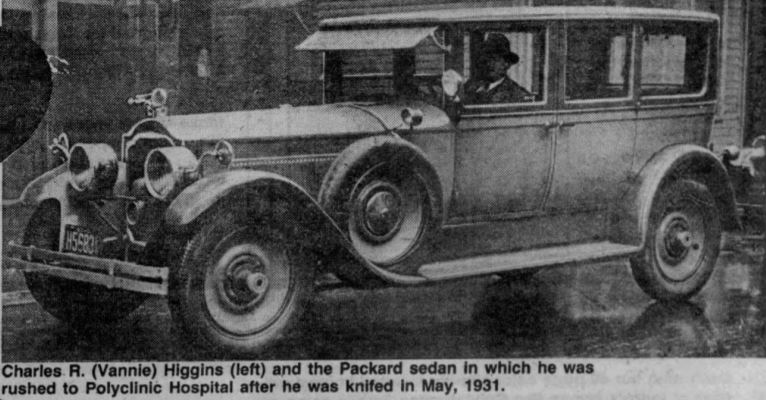 A few days after the Bob Benson murder, Vannie Higgins was arrested by the coast guard on board his boat in Long Beach, collecting a shipment of alcohol, arrested along with Higgins was Morris Grossman, chief of the Long Beach Police Department along with 8 other police officers, Grossman and the other officers were accused of standing guard while the shipment was being unloaded. At the trial, one officer admitted to accepting money and booze from Higgins but since he was off duty, he wasnt grafting, the case against Morris Grossman was dropped and Higgins was found not guilty. Two months later Higgins was again arrested in New Jersey, this time with $180,000 worth of whiskey, he claimed he was just a lobster fisherman, an excuse he would use often, again he was found not guilty.

Vannie Higgins life would come to an end one night after his daughters tap dance recital in the Knights of Columbus building in Prospect Park, Higgins was with his wife and his mother. What happened next still remains unclear, according to Vannie Higgins wife:

Higgins and his family left through a side entrance to the club on Union Street, Vannie was walking in front holding his daughter’s hand. As Higgins reached his car, a dark sedan came slowly toward him. From twenty feet away a gunman began firing, Vannie pushed his daughter out of the way and ran out into the open to draw the gunfire away from his family.

Vannie ran down Union Street with shooters from two cars now firing at him. Higgins by now had been hit several times. His fedora hat lay in the gutter and his light gray suit was blood splattered. When he collapsed on Union Street his assailants continued to fire at him. He struggled to his feet and ran a short distance to Eighth Avenue, turned and staggered another hundred feet before he fell again.

According to Police Higgins was invited into a parked car where 2 gunmen inside the car shot him four times. The case remains unsolved but there are a number of theories as to who was behind it, some say it was revenge for an earlier shooting of Jack “Legs” Diamond or Leo Steinberg, Higgins was a suspect in those shootings, another theory suggests he fell out with Little Augie Pisano or Dutch Shcultz wanted him gone.

Despite 3 blood transfusions Vannie Higgins died from his wounds. Police had asked him several times to name his killers but he refused, sticking to the gangster code of silence.