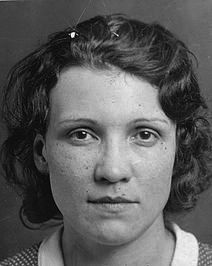 Lottie was definitely a gangster in her own right, no crime seemed to bother her and she was more than capable of holding her own in a fight.

Vincent Coll was arrested for the boy’s murder, and the case went to trial in December 1931. Coll hired high-profile lawyer Samuel Leibowitz. The jury returned with a verdict of not guilty.

Immediately after the trial, Coll married Lottie Kreisberger and lived with her at the Cornish Arms Hotel in Chelsea, where the two of them had already been staying.

In 1933, she and two male gangsters were arrested for robbing a jewelry store and killing a woman, Millie Schwartz in the course of the robbery. She was charged with second-degree murder, but pleaded guilty to manslaughter.

She received a 6 – 12 year sentence for her involvement in the murder of Millie Schwartz. After serving her prison term, she dropped out of the public eye.