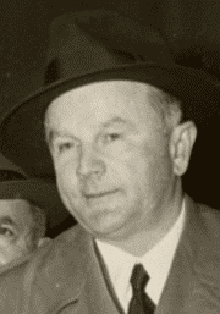 Edward J. McGrath, or “The Big Guy,” as he came to be known around the docks, was born on January
31, 1906. His parents were two Irish immigrants who had settled on the Lower East Side of New York
City in an area known as the Gashouse District. During his formative years, McGrath had a relatively
normal childhood even though his family resided on the peripheries of a tough poor neighborhood and
were not by any means privileged.

Still, Eddie excelled in school, was a member of the church choir, and
worked a number of well-paying clerical jobs. He appeared to be on the right path, but after losing both
of his parents before he reached his late teens, he began to drift into the world of petty crime.

Graduating from a burglar to a proficient armed robber, McGrath later fell in with Joseph Rao, a
Genovese family Capo, during Prohibition. While still in the beginnings of his criminal career, McGrath
was hit with a five-year sentence in Sing Sing. Prison has often been referred to as ‘college’ for
gangsters, which proved true for McGrath. Early on in his term, he became associated with a group of
incarcerated West Side Irish stick-up men, which included his future brother-in-law, John “Cockeye”
Dunn.

Upon their release from prison, McGrath and his new West Side friends began to rob, hold-up, and steal
anything that they could get their hands on. However, with Prohibition drying up, the West Side
suddenly became a competitive criminal landscape that consisted of out-of-work hoodlums scrambling
for every buck they could get their hands on. The most lucrative remaining rackets could be found on
the numerous West Side piers where a mobster could engage in labor racketeering, gambling, loan
sharking, cargo theft, and everything else in between.

West Greenwich, Chelsea, and Hell’s Kitchen became a battlefield as desperate criminals fought to
establish themselves on the thriving waterfront. McGrath and Dunn would play important roles in an
eventual gang war that resulted in eleven murders, six near-killings, and dozens of shootings. Key events
included the murder of a rival while he slept in bed beside his wife and the brutal slaying of a gangster
and his girlfriend, the latter whom was killed by a gunshot through the top of her head while she sat on
the ground and begged for mercy.

When the smoke cleared, McGrath and Dunn had established themselves as a pair of cold-blooded
killers. With their newfound power, the two vaulted themselves into leadership positions within New
York City’s Irish Mob and, more importantly, on Manhattan’s West Side waterfront.

Other key members of their gang would grow to include their hitman of choice, Andrew “Squint”
Sheridan, the notorious Bell brothers, George Daggett, Robert “Barney” Baker, John “Peck” Hughes,
Frank “U-Boat” Kelly, Connie Noonan, Robert “Farmer” Sullivan, and Nicholas “The Bull” Tanzella. The
gang also formed alliances with other key waterfront hoodlums such as Timothy O’Mara, a former
confidant of Owney Madden, and the Bowers’ Gang of Hell’s Kitchen.