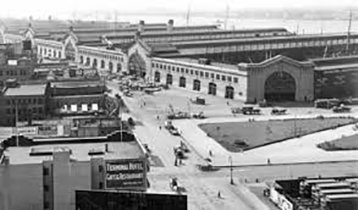 The West Side piers, or the North River waterfront as it is commonly known as, stretches along the
Hudson River from West Greenwich (between Houston and 14th Street) to Chelsea (14th Street to 34th
Street), to Hell’s Kitchen (34th Street to 42nd Street), and all the way to the Upper West Side (59th
Street to 110th Street).

With over $900 million in facilities (or nearly $12 billion dollars today), the New York City had the
world’s largest and busiest port with annual revenues of over $146 million dollars (or nearly 2 billion
today). Out of the more than seven hundred miles of waterfront, over three hundred had been
developed into piers. The port had roughly nine hundred docks operating in Manhattan, Brooklyn, and
Staten Island; over one hundred ferry landings; and tens of thousands of associated businesses,
shipbuilding plants, and warehouses. Twelve major railroads connected to the waterfront, trucks
constantly moved on and off the piers daily, and a quarter of Manhattan’s food was brought in by boat.

Using their fearsome reputations, the Dunn-McGrath Mob assumed control of many of the key illegal
and quasi-legal industries that were connected to the waterfront. The duo also muscled their way into
key union positions within the International Longshoremen’s Association (ILA) and the American
Federation of Labor. By 1940, McGrath had begun working as an Organizer for ILA, while Dunn ran his
own union local connected to the loading industry. The legitimate union officials needed the gangsters
for muscle and McGrath and Dunn needed the unions to help maintain their operations on the piers.
The mutually beneficial relationship flourished, and the mobsters counted many key labor leaders as
close friends.

For the next decade, McGrath and Dunn together ran their own unchallenged criminal organization that
controlled the piers with an iron fist. Nothing moved on the waterfront without their say-so and they
had their fingers in every pie. To maintain order, the duo were responsible for ordering or carrying out
more than thirty murders, and longshoremen up and down the West Side knew not to talk about the
hidden overlords that oversaw their day-to-day existence.

It was not until the late 1940s that the gang hit their first stumbling block. After the murder of a
renegade hiring boss went wrong, Cockeye Dunn, Squint Sheridan, and a third member of the gang were
all found guilty of murder. McGrath lost his brother-in-law and favorite enforcer to the electric chair and
the government began to turn their attention to the plight of New York City’s longshoremen and the
corruption that permeated through the largest port in the world.

As law enforcement pressure began to build, McGrath disappeared from New York, eventually resettling
in Miami. He claimed that he was now retired and told the FBI that they wouldn’t hear from him again.
However, after nearly a decade of intensive investigation, it was determined that McGrath had
continued to operate his rackets through two proxies in New York City, Henry “Buster” Bell and Hughie
Mulligan. When it was all said and done, they found that when it came to the final word concerning
criminal activities on the waterfront, McGrath was still the man to see.

Although the non-stop surveillance of McGrath would continue well into the 1970s, he only served a
thirty-day jail sentence in the 1980s before quietly passing away on April 15, 1994.
In the end, McGrath had secretly influenced the International Longshoremen’s Association for over
thirty years and became the longest tenured New York City Irish mob boss in modern times, all while
having his name barely make the newspapers.