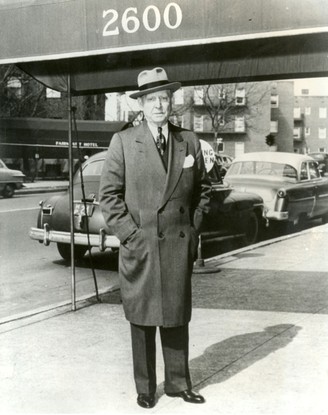 Frank Hague was born on January 17,1876, to Irish immigrants Margaret Fagen/Fagin and John Hague from County Cavan, the second of eight children. His father worked as a blacksmith and a bank guard. Frank Hague had grown up in the “Horse Shoe” section in Jersey City’s old Second Ward – an area of tenements and railroad yards, with a bar on almost every corner.

The “Horse Shoe,” section was mainly Irish, Catholic and working class. These poor immigrants and sons of immigrants worked in the railroad yards and on the docks, which were part of their neighborhood. Crime flourished, gambling and drinking were common & brawls were constant.

One of the bars on the corner of the Horse Shoe sections “Cork Row,” where Hague was born, was run by “Ned” Kenny, father of John V. Kenny, who would later become mayor. It was “Ned” Kenny who helped Hague to run for office and gave money to finance his first political campaign.

Much of Hague’s political strength was drawn from the poor Irish, who felt that they had been “held down” and exploited by their Protestant landlords and employers, who lived in luxury “up on the hill” in Jersey City’s Bergen section. They equated being Protestant with being Republican, an ignorance that Hague exploited to the fullest.

Hague would become a shrewd political operator and was unquestionably one of the strongest political bosses America had ever seen. His influence was state-wide, and when he became Vice Chairman of the Democratic National Committee he also wielded national influence. He was colorful and often resorted to tactics that were unbelievable to most citizens outside of Hudson County.

In one such trick, “The One Day Republican” that was engineered by Hague, an invasion of twenty thousand Democrats, mostly from Hudson County, invaded the Republican Primary to insure a rival’s defeat. The “One Day” Republican scandal rocked the State. The candidate that was targeted in the race for Governor was former Judge Robert Carey, of Jersey City.

As a politician Frank Hague would have puritanical crusades to eliminate “houses of ill repute,” the closing of the burlesque show at the Majestic Theatre, opposite City Hall, the elimination of the sale of anything even remotely pornographic among other hot issue’s of the day which earned him very favorable mentions from the pulpit of Catholic and Protestant churches across the city. Hague wanted strong enforcement of all “moral” laws and his insistence that “any man, woman, or child may walk the streets of Jersey City at any hour of the day or night, without fear.” Hague’s strong-arm police force ensured it.

In the 1920s, The Jersey Journal stood up to one of the most powerful political bosses in New Jersey and American history by using its editorial and journalistic platforms to lay bare Mayor Frank “I Am the Law” Hague’s heavy-handed tactics.

From their Editorial in 2016 they say “Like most bullies, Hague responded to being challenged with attempts to overpower his opposition, in this case to silence the voice of the newspaper.”

As mayor, Hague reportedly earned a salary between $7500 and $8000 a year. But his lifestyle defied that salary range. He lived in a fourteen-room duplex apartment on the ninth and tenth floors at 2600 Kennedy Boulevard. Hague had homes in Deal, NJ and Miami Beach, FL;, he also rented a suite in the Plaza Hotel in New York City and had trips to Paris with his wife. Hague enjoyed the “sport of kings” and was frequently observed at the racetrack, ready to place his bets with $1000 bills. Hague traveled in a bulletproof automobile and was flanked by bodyguards.

Frank Hague was the absolute boss. His dominance started in 1917, when he was first chosen Mayor, to 1947, when he retired in favor of his nephew, Mayor Frank Hague Eggers. It was thirty years of uninterrupted rule.

Ned Kenny’s son, the same Ned that gave Hague his first campaign finances, would later run for office and defeat Hague Eggers. Kenny, also from the Horseshoe section, was one of Hague’s lieutenants known as the “Twelve Apostles.”

Kenny himself would serve less than half of an 18‐month sentence for a guilty plea to Federal income tax evasion, a charge from an indictment in 1970 that doomed the absolute political power he began amassing in Hudson County with his mayoral election in Jersey City as a “reformer” in 1949.

“Cork Row” disappeared with the construction of a highway to the Holland Tunnel was built.