Humpty Jackson – The Hunchback of the Gas House District 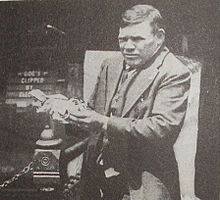 Thomas “Humpty” Jackson born in 1879 and died in 1951, he was a New York criminal and last of the independent gang leaders in New York’s underworld during the early 20th century.

He was, however, known to be a violent man who regularly carried three revolvers, including one in his derby hat and another secreted in a strange-looking small sweaty holster under his hunchback.

He was born in the Manhattan Gas House District in Nov. 1879 to Irish immigrant parents. Although little is known of his early life, Jackson had an excellent educational background despite his reputation as a ruthless criminal with a gang numbering fifty men. Some of the more colorful names of his gang were named Monahokky, The Grabber, Candy Phil, Spanish Louie, and the Lobster Kid.

His criminal empire was based in and around the old Gas House District in New York, the gang worked out of an old graveyard located between First and Second Avenues and between 12th and 13th Street in Manhattan. Jackson was said to have given out orders from blackjacking to murder for hire to various members of his gang

Although involved in organizing and planning, specifically armed robberies, burglaries and looting of warehouses, Jackson rarely participated in the actual criminal activities. However, on the evening of May 21, 1900, Jackson stabbed New York City policeman William J. Tynan five times. Tynan and his partner had been looking for Jackson because he was suspected of having stolen a gold watch and chain.

As well as specializing criminal activities, Humpty Jackson was also employed on voting days as an election rigger. Tammany Hall boss Charlie Murphy, found he could use Humpty and his gang to repeat vote and for ballot box stuffing and in Humpty Jacksons own words Republican Slugging as he told Colliers Magazine

“…we’d gang the joint. Smack a couple of Republican ballot watchers over and swipe the boxes and throw them in the river.”
Humpty Jackson

As of 1905, the Humpty Jackson Gang were considered among the “big four”, along with the Cherry Hill and Five Points Gangs, which dominated the Lower East Side.

But like everything else what goes up must come down. And Jackson’s downfall began when he began attracting all the wrong attention, especially from the police and media. How it started was a fight with an ex member of the gang, who after a beating, avoided being shot because the gun jammed, the ex member Fredrick Keller escaped and made it to the police station.

The police arrived and arrested Jackson, the Riley brothers and William Noble, but while the police brought them back to the station an army of up to 30 mobsters appeared, a shot rang out, the police fired back and a fierce gun battle followed. In the chaos, bricks and bottles came raining down from the tenement windows, Humpty Jackson shot officer Ed Reardon four times. For this Jackson was sentenced to 2 and a half years in prison.

By the time Jackson was released, Tammany Hall had found a new gangster to do their bidding, Jimmy Kelly, Jackson didnt take kindly to this and began to stalk Kelly until eventually one night, Jackson shot Kelly in the neck and once in the groin, though Kelly would survive, Jackson was facing life in prison for being a habitual criminal, he plead guilty to the charges and received a three year sentence.

Upon his release and with the redevelopment of the old Gas House District Jackson decided to go straight. He got married, settled down and moved to East Harlem where he opened a pet store until he died in 1951. He did give interviews about his life to Colliers Weekly in 1929 & the New York Times in 1932.