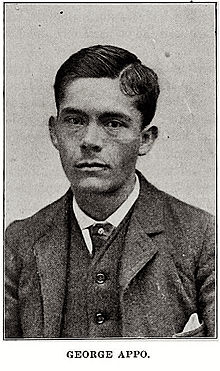 George Washington Appo was born on the 4th of July 1854 in New Haven, Connecticut to a Chinese father, Quimbo Appo also known in Chinese as Lee Ah Bow and an Irish mother Catherine Fitzpatrick. George Appo died in Manhattan in 1930.

George Appo was no ordinary criminal. He was mostly forgotten at the time of his death, but during his lifetime Appo was an underworld celebrity in nineteenth-century New York City.

Though he was born in Connecticut he lived most of his life in the notorious Five Points neighborhood in Manhattan, near Donovans Lane also known as Murderers Alley, which is now where Chinatown is located.

He grew up in poverty, without his father, his father was also a criminal and was serving a sentence for murder. He supported himself first by selling newspapers at the age of 13 and then met boys his own age who were making good money picking pockets. At the age of 15 he was caught pick pocketing and given his first custodial sentence.

He was a small and unassuming character at age 18 he stood at 5 foot 5 inches in height and weighed around 120 pounds. His facial features resembled that of his Irish mother but had his fathers dark skin complexion. Later in life his face would bear scars and had a glass eye, from a lifetime of crime. On the street Appo was physically assaulted at least nine times, shot twice, and stabbed in the throat once. More than a dozen scars decorated his body.

Appo again was caught for pick pocketing at age 18, this time he was caught robbing a customs house inspector, Alfred Gilbert. This earned Appo a place in the Rogue’s Gallery as number 1441, his picture included. The Rogue’s Gallery was an early identification system for police, it was the idea of New York Detective Thomas F. Byrnes, Byrnes would release a book called Professional Criminals of America and included photographs and biographies of all the top criminals in America at that time.

He became an opium addict during his life dive bars and opium dens were main feature around New York in those years. On successful nights during the 1870s and 1880s, he could earn in excess of six hundred dollars pilfering the pockets of those around him, it was equivalent to the annual salary of a skilled manual laborer.

One of the more extravagant crimes he engaged in was the Green Goods Scam or Green Goods Game counterfeiting schemes. In the typical green goods scam, the victim, would respond to a flyer circulated throughout the country by the scammer which claimed to offer “genuine” counterfeit currency for sale. This currency alleged to have been printed with stolen engraving plates. Victims were shown large amounts of genuine currency – represented to be counterfeit – which was then placed in a bag. They then received offers to purchase the money at a price much less than face value, usually cents to the dollar. While a victim was otherwise distracted, another accomplice would switch the bag of money for a bag containing sawdust or green paper.

Throughout his 30 year career as a pick pocket and swindler Appo was tried by a judge and jury on at least ten occasions. As a result he spent more than a decade in prisons and jails. While he was in jail he experienced New York’s first experiment in juvenile reform with the school ship Mercury, as well as the easy escapes from the Blackwell’s Island Penitentiary and the corruption associated with the nation’s largest jail: New York’s “Tombs.”, and the industrial discipline of American penitentiaries. During various incarcerations Appo’s teeth were knocked out, and he encountered a wide array of prison tortures.

In 1894, he gained celebrity status by starring in a play in the Tenderloin District, “where he made honest money for himself”. The play incorporated aspects of the life of a criminal which appealed to many people at the time. He was cast because his criminal record gave him celebrity status and he actually had a part written for him specifically. Appo lived off his earnings from the acting and started to venture away from his old criminal life. Although Appo was earning money the honest way from the play, he found out that he himself was being swindled by the producer out of much of his earnings when the play went on the road.

He again found notoriety by telling his tales of police corruption before an investigative committee, that generated not only front-page attention in the press, he explained in great detail the life of crime and in particular the Green Goods Scam, this earned him hatred in the underworld.

Perhaps most extraordinary, George Appo wrote an autobiography, which was never published, it was later taken and rewritten by Timothy Guilfoyle and released under the name, A Pick Pockets Tale.

George Appo’s father died in a hospital for the criminally insane, his mothers fate is unknown.