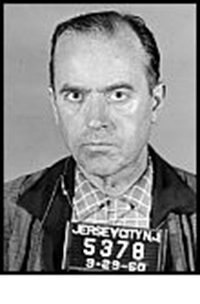 Joseph Vincent Moriarty also known as Newsboy Moriarty, was a mobster and ran a numbers racket in Hudson County, New Jersey who controlled the numbers racket.  He was known as “Newsboy” because in his youth he sold papers in the bars and restaurants around his his neighborhood

He started in the numbers racket around 1923. He always wore the same set of clothes, he lived with his two sisters in a small brownstone house in the Horseshoe section of Jersey City that housed the poor Irish immigrants.

An incident in 1958 brought Moriarty to the attention of quite a few people including the police. A train derailed & two cars plunged off the Newark Bay railroad drawbridge killing 48 people, a third train carriage 932 ground to a halt and hung over the edge but didnt fall, a large amount of people placed bets on the number and the number 932 was the winner the following day. Moriarty payed out in full to everyone, which may have led to him being arrested.

Moriarty was arrested for possession of 20,000 worth of betting slips and was sent to prison. While he was in prison two workers, who were fixing a garage came across his 1947 Plymouth at Oxford Avenue in Jersey City. In the trunk of the car they found $2.6 million in cash and $13,000 in stocks and bonds. On July 3, 1962, FBI seized the assets. Moriarty denied  he owned the money and bonds but then filed a tax form listing them as his income.

He was released from prison in 1965. He was rearrested and sent to prison and ordered to pay $1.5 million in federal income taxes. By the end of his criminal career, he had been arrested a total of 47 times.

In his last time being in prison he got cancer, he applied to have his sentence commuted to the New Jersey Governor in 1976, which was granted, he died 3 years later in hospital.

You can read his entire (1000 pages) FBI file here http://documents.theblackvault.com/documents/fbifiles/FBI-Newsboy.pdf