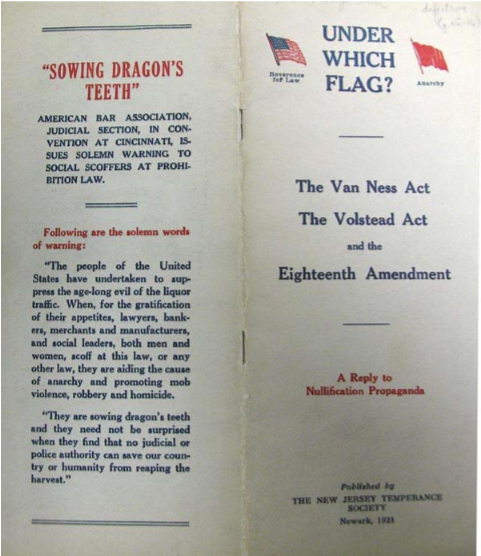 The controversy over the nation’s Prohibition Amendment spilled over into New Jersey politics. Republicans, whose base was in the more rural parts of the State, supported Prohibition; Democrats whose strength was in the big cities were opposed to Prohibition.
The differences between the two sides can be seen in the debate over the Van Ness Act, sponsored in the New Jersey legislature in early 1921 by Republican assemblywoman, Jennie C. Van Ness. The most controversial part of the bill was the provision that a New Jersey magistrate could have a person suspected of manfacturing or selling alcohol arrested and found guilty without benefit of a jury trial.
The Democratic Governor of New Jersey vetoed the bill, but the majority Republicans in the legislature overturned it. A withering public debate ensued, with Democratic “Wets” condemning the Act as a fanatical attack on personal liberty, and the Republican “Drys” depicting their opponents as enemies of the rule of law like communists and anarchists.
In February, 1922 New Jersey’s highest court ruled the Van Ness Act unconstitutional. It meant that, for a time, enforcing Prohibition in New Jersey would largely be left to the Federal government — a victory for “Wets” in the Garden State. Later in 1922, New Jersey passed the Hobart Act which reformed the Van Ness Act.
The image is a propaganda leaflet for support of Prohibition
Sources:
Special Collections and University Archives, Rutgers University.
The Monmouth County Archives