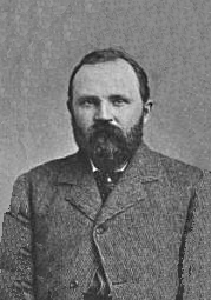 James Hope was born in Philadelphia to Irish parents in 1836, the family were poor and Jimmy took a job as a machinist when he was a teenager. He married young and had a family but Jimmy Hope would soon find himself attracted to a life of crime. He would go on to become one of the most successful and sought after bank robber, burglar and prison escape artist in US history.

One of his first bank jobs came in April 1869, a “well dressed stranger” entered the Kensington Savings Bank in Philadelphia and asked to speak with the President of the bank, the meeting was granted and the stranger introduced himself as a detective and he had reliable information from the chief of police that the bank had been targeted for robbery and that 3 or 4 policemen would be sent to the bank overnight to protect the bank and catch the robbers.

Later that day, 4 policemen arrived at the bank and stood guard with two porters employed at the bank. Around sometime in the evening one of the porters was sent out to get some beer, when he left the lone porter was overpowered and gagged by the “policemen” who were actually Jimmy Hope and his gang, when the porter who left returned he suffered the same fate. The gang left with $80.000 to $100.000 but a fight broke out between the gang when the take was being divided and resulted in 3 of them being killed.

In 1870 Jimmy Hope, and 3 others would be caught, arrested and sentenced to 5 years in Auburn prison for the robbery of Smiths Bank in Perry, New York. Jimmy Hope, “Big” Jim Brady, Dan Noble and Charles McCann all escaped from prison in January 1873.

The next big robbery and the next time the gang were caught was in Wilmington, Delaware. Hope and his gang rented a house near to the bank on the morning of the robbery, some of the gang broke into a bank cashiers house, took their family hostage and planned to rob the bank. A servant in the house escaped and alerted the police who caught the gang, they were sentenced to 40 lashes and ten years’ imprisonment. They were also made to stand one hour in the pillory and pay a fine of $5,000 each. All of them offered to pay $25,000 instead of the whipping but this was denied by the court. When they had served one year of their term the entire gang, Jimmy Hope, im Brady, Frank McCoy, Tom McCormack, and George Bliss, escaped.

But probably the biggest and most well known bank job, maybe one of the biggest in US history would be Hope’s biggest job. The Manhattan Savings Bank robbery of 1978. Working with the Leslie Gang, it is estimated that the Leslie Gang were responsible for almost 80% of the bank robberies in New York at the time. Although George Leonidas Leslie planned and organized the robbery, a few fight between him and other members of the gang resulted in Leslies death, other gang members took over the operation.

On the day of the Manhattan Savings Bank robbery Jimmy Hope & and other masked men broke into the bank and took the janitor and his family hostage, the janitor and family were living in an apartment within the building. Hope and another gang member Samuel Perris then opened the vault using safe cracking tools. The robbers exited the bank with almost $2.7 million in cash, coupon bonds and treasury bonds. After they left the bank the janitor, escaped and alerted police, a detective who would become famous investigated, Thomas F. Byrnes an NYPD detective who was born in Dublin, Ireland discovered that a bank watchman was in on the job, Patrick Shevlin, would identified Jimmy Hope his son John and 8 others, they would be found and arrested in different parts of the country and brought back to New York to stand trial. Hope and his son, along with Bill Kelly were convicted and sentenced, the other were acquitted.

Jimmy Hope was snet back to Auburn prison, where he escaped for a second time within a year. Hope later turned up in San Francisco after another bank job in 1881, as he lowered himself into the bank he was greeted by heavily armed police, Hope drew his revolver but dropped it when he seen he was outnumbered by police with shotguns. He was arrested and sentenced to San Quentin prison where he served 7 years and brought immediately back to Auburn prison to finish his remaining sentence.

In all Old Jimmy Hope was suspected of robbing banks in Philadelphia, Connecticut, Maine, New York & San Francisco, as well as the ones he was caught for making millions in the process. He died in Manhattan in 1905 where he lived out the last days of his life with his wife and daughter.