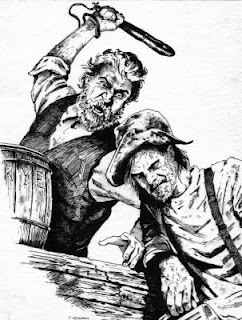 In the mid 1850’s three ships sat stationary on San Francisco Bay with no crew on board. The captains of the ships had notoriously bad reputations, and the sailors around the town gave these captains a wide berth. The three captains desperate to get sailors onto their ships rowed ashore and appealed to the one man whose record for supplying sailors was second-to-none James Kelly also known as Shanghai Kelly.

In the Gold Rush era, what is now San Francisco’s Chinatown, North Beach & Jackson Square was known as the Barbary Coast. The Barbary Coast was a red-light district which featured dance halls, saloons, bars, jazz clubs, variety shows, and brothels. Jackson and Montgomery streets were the heart of the Barbary Coast, it was a raucous lawless place in the days when gold dust was plentiful and sailors were scarce.

One of the residents of the Coast was a man by the name of James “Shanghai” Kelly, who had a red beard and a fiery temper. Kelly kept a boarding house and ran a number of bars including the Boston House, at the corner of Davis and Chambers streets near the waterfront. He also ran a saloon and boarding house at No. 33 Pacific between Drumm and Davis street.

These businesses provided Kelly with a steady supply of victims. Kelly was a crimp or Shanghaier, a “black trade” where a person would procure sailors for understaffed ships in need of crew, the tools of the trade were knock-out drops, usually chloral hydrate, laudanum or opium and or a blackjack.

The captains paid Kelly a visit and asked him to help. After considering the potential profit in such a tall order, Kelly hatched a plan, he hired a paddle powered steamship.

With such a large amount of sailors to “Shanghai” he issued an open invitation throughout the Barbary Coast to join him on a bay cruise to celebrate his “birthday.” Over a hundred salivating sailors, who couldn’t resist his generous offer of free grub, grog, and revelry, boarded the paddle wheeler Goliath. As the cruise left the dock, Kelly proposed a toast, “To all my faithful friends: you’ve made me what I am today. Now down the hatch.”

Within three hours, all but Kelly and his cronies were knocked out cold by the opium-laced whiskey. Kelly pulled the party boat beside each ship where his men hoisted the lifeless sailors over the bulwarks. Next day far at sea, the shanghaied sailors woke up far out to sea with the familiar sound of salt spray hitting the deck and winds flapping the sails.

In 1967 this  story was featured in an episode of the TV show Death Valley Days. And in San Francisco there is an old-time saloon on Polk at Broadway named Shanghai Kelly’s, if you should visit, just dont drink the whiskey lol.