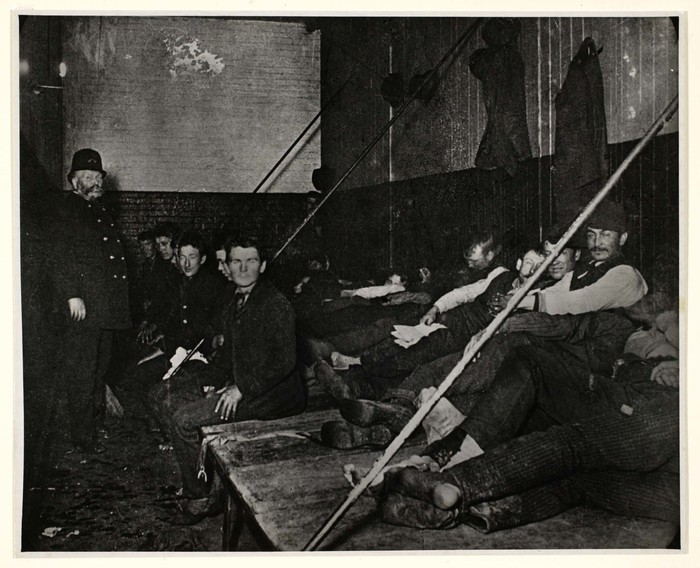 The photo is from inside the Oak Street Police Station. Its part of a collection called How The Other Half Live the picture was taken by Jacob Riis in 1888

Back in Old New York there were many characters and many crazy stories, the homeless had their stories too, they were known as the Bowery Bums.

The dive bars around the Bowery, Five Points & Hells Kitchen were gathering points for gangsters, murderers, pickpockets etc, they were also places where the pan-handlers, beggars, cocaine & morphine addicts and the homeless would go too.

Whiskey was sold for 5 cents for a large glass and the cheaper mixture of water and camphor, which by all accounts was a fierce mixture. They could also buy hot punch which was a foul mix of whiskey, rum, camphor, benzine and cocaine sweepings, which is said to contain a case of delirium tremens in every drop, that sold for 6 cents a glass. Some dive bars would sell two drinks for a nickel between 5 & 5.30am every day and sometimes would need to call in the police to keep the cues in order.

Some of the Bums that could be found in these bars were once born into rich and well to do families, one was once a wealthy merchant from Baltimore, another was from a rich family in Boston, who had attended Harvard. And another who was known as The Scholar who claimed to have been to Yale. The Scholar would sell poems for two drinks or a small sum of cash. These poems were put to use by other Bums who would use blindness as their graft. This is one such poem

Some of the Bums preyed upon the public by simulating cripples. The owner of one dive would provide storage for crutches and canes while they drank their days earnings.

One of the best known Bums of the time was Tom Frizzell, known as the king of the panhandlers. Tom usually sat in a bar where the portraits of 14 Presidents hung above the bar, he said they gave him luck as he had never been without money to pay for a bed for the night.

Another Bum who was a resident at the Doctors dive bar was Jack Dempsey. Jack earned his nights lodgings by washing glasses and scattering sawdust on the floor. Jack Dempsey was the lowest in the order of Bums he was a camphor fiend and cocaine addict, when he could afford whiskey he would add 8 or more drops of camphor to it. When he would be crashing he would plunge a needle full of cocaine into his arm. In this world he people who would inject were the aristocrats, lower down were the sniffers who would snort the coke and lower down were the ice cream eaters who would chew rocks of cocaine, opium or morphine.

Some places would fit iron bars to the walls and iron poles a few feet away and lash ropes to them to make some kind of bed, Bums and other drinkers who got too drunk would be carried to these to sleep off the effects.

← Dive bars, saloons and other places of sin ← The Child Gangs of New York