The Child Gangs of New York 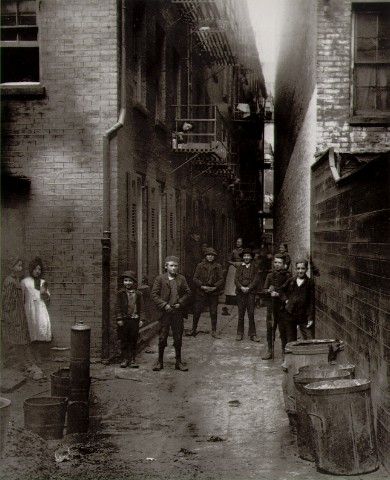 The photo is a child gang of orphans that lived in the alleys somewhere around Mulberry Street and was taken in 1888. It was part of an exhibition called How The Other Half Live by Jacob Riis.

In early New York child gangs were mainly confined to the Five Points, the Bowery and the Fourth ward all in and around lower Manhattan. By the 1870’s child gangs were common throughout New York City made up mainly of homeless boys and girls.

Most of the time these child gangs were left to themselves and ran their own gangs but other gangs were under direct control of the adult gangs and were taught how to steal, pickpocket and rob purses and handbags.

They lived in alleys, the docks, in basements of tenements & cellars and if they werent fed by the older gang members they would find food by scavenging through bins and garbage.

In the Five Points in the 1850’s the main gangs all had their child gangs working with and for them, The Forty Little Thieves, The Little Dead Rabbits, The Little Plug Uglies. In the Fourth Ward there were the Little Daybreak Boys, who would accompany the older Daybreak Boys on jobs, they would be used to crawl in through port holes on ships to open doors and drop ropes down to the older gangsters to climb and rob the ships docked in the rivers.

Some of the gangs were lead by girls, The Forty Little Thieves, was run by a girl called Wild Maggie Carson. She became a bit of an exception in that world, the Rev. Mr. Pearse would run a mission in the area and taught her how to sew buttons, its said she enjoyed sewing as much as she loved fighting. At the age of 15 she was adopted into a good family and married later in life, leaving behind that world.

Other were less fortunate, they came under the care of people like Italian Dave, a fagin, who would provide the children with some food and place to sleep. He would teach them how to steal and pick pocket properly by dressing dummies and showing the kids how to rob them. he would send the kids out everyday to steal or hire them out to other criminals to act as lookouts or burglars. When hiring one of the youngsters, the older gangster would have to pay the fee, but also make sure that the child was fed and looked after for the time they were away.

← The Bowery Bum’s ← The Short Tails