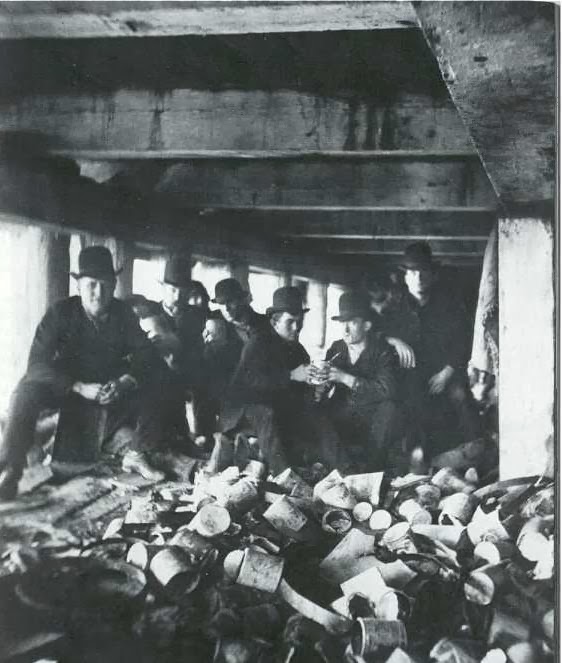 The Short Tails (Not to be confused with the Shirt Tails, who were an earlier gang)

This is a photo of a real Gang of New York, under a pier in Corlears Hook, it was taken in 1888 and part of an exhibition called How The Other Half Lives by photographer Jacob Riis

The Short Tails were a particularly nasty gang of criminals who terrorized the Lower East Side and the docks of Corlears Hook. By the 1910s, this sinister gang had been absorbed into other street gangs. The Eastman Gang were also headquartered around Corlear’s Hook and may have had its beginnings as a break away gang of the Short Tail Gang.

Their headquarters was based at the corner of Rivington and Goerck Street. In 1882, this gang began terrorizing a German-owned saloon in the area, attacking the owner with a broken beer glass. In August, the leader of the Short Tails, Frank Nixon, was seriously injured in a shoot-out at the bar.

They loved beer and they loved it so much they were known for a trick called “rushing the growler,” where they ran into a bar and filled up buckets of beer and taking it back to headquarters. The person who went into the bar would simply fill up the bucket and march out of the saloon without paying for it, if the barkeeper attempted to stop him, the gangster would abuse the barman and threaten to bring the wrath of the entire gang down on the saloon if he didn’t “hold his yawp.”

From a report in 1884: “The members of the gang are known to the police as hard drinkers, thieves, pickpockets and highwaymen.”

They often committed crimes on vessels along the water front. The unfortunate members of the Young Men’s Cathedral Association learned this the hard way during an river outing in 1886. “Some members of a notorious gang, calling themselves the Short Tails, smuggled themselves on the boat, got drunk and began to fight.”

The gang was certainly no match for the police. One officer in the 1880s, avenging a friend killed by a Short Tail, stormed right into their headquarters “without club or firearm of any kind” and personally throttled a great number of them, “grabbing two of the more notorious by their coat collars” and dragging them to jail.