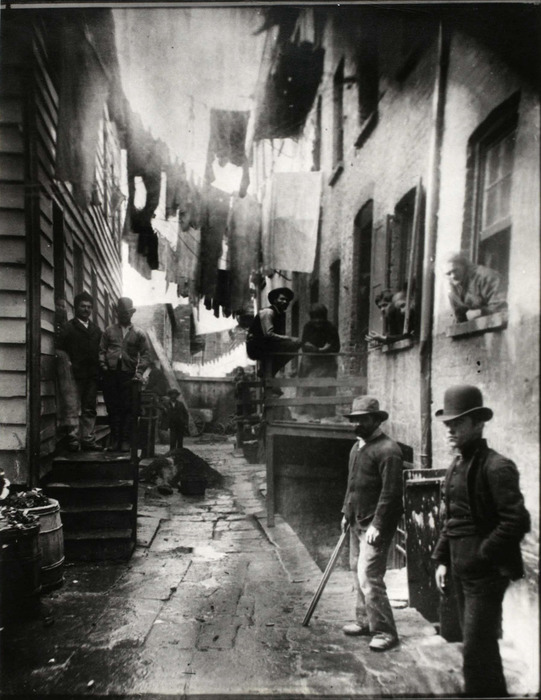 The photo is a picture of an unnamed real Gang of New York in Bandits Roost an alley somewhere in Mulberry Street. Its part of an exhibition called How The Other Half Live by photographer Jacob Riis.

If the Five Points of Manhattan was the poorest, most crime-ridden neighborhood of the mid-1800s, then perhaps Donovan’s Lane was the worst part of Five Points.

Called “Murderers’ Alley,” it was a tiny rookery a few blocks from City Hall that linked Baxter and Pearl Streets, providing an escape route for criminals as well as a resting place for drunks.

A maze of back alleys and hidden passageways, the Mulberry Bend on Mulberry Street was a gathering place for generations of New York’s underworld. From the Dead Rabbits to the Gambino Crime Family, the Bend’s horrific conditions served as an incubator for the gangs of New York. Today, only a tiny sliver of this infamous neighborhood still exists.

Mulberry Street was the beating heart of the slums of the Five Points. Located between Worth and Bayard Streets, The Mulberry Bend was a place where the poorest of the poor scrambled to survive. A home for the unwanted and unwelcome.

In the days before the American Revolution, the street was named for rows of Mulberry trees on the banks of the Collect Pond, one of Manhattan’s freshwater reservoirs.

By the time of the Potato Famine 1800’s, the Bend ranked as one of the densely populated urban areas in the world. For most of the 1800s the Bend’s population consisted of Irish immigrants and free African Americans, but by the 1880s Italians became the dominant group

With hidden passageways and back alleys, and names such as Rag Picker’s Row, Bandit’s Roost and Dynamite Alley, the underworld used Mulberry Bend to their advantage, hiding from both the police and sanitary inspectors.

Rag Pickers, the lowest of New York society, congregated in Rag Picker’s Row, another of the Bend’s enclaves where they would collect their rags scavenged from the city’s trash. Nearby visitors could find Bandit’s Roost, a favorite haunt of murderers and thieves.

The Dead Rabbits, the Roach Guards, the Whyos, The Five Pointers and eventually the Mafia all called Mulberry Bend home. During the Civil War, the Dead Rabbits, an Irish street gang, headquartered their gang on Mulberry Street, where they committed many crimes during the Draft Riots. By the 1870s, a gang called the Whyos, dominated Mulberry Street and much of the Five Points. Naturally, Mulberry Bend became their homeland.

As people changed at the turn of the century from Irish to Italian, the Mafia emerged as lords of the Bend.

← The Short Tails ← The Whyos Gang