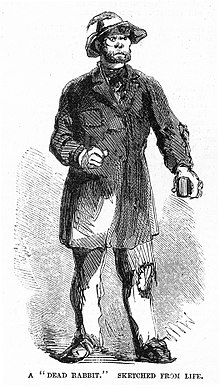 They were founded by Shang Allen, one of many disgruntled gang members of the Roach Guards, they became the largest Irish crime organization at the time in mid 19th-century Manhattan, having well over 100 members when called up for action. Its said they got the name the Dead Rabbits after a dead rabbit was thrown into the center of the room during a gang meeting, some members of the gang saw this as an omen and formed an independent gang.

They often clashed with Nativist political groups, such as the Bowery Boys who viewed them as a threatening and who gave their loyalty to a foreign Pope. Their battle symbol was a dead rabbit on a pike, which would be held up as they headed into battle.

Besides street-fighting and general thuggery, the Dead Rabbits supported politicians that were endorsed by Tammany Hall, and under the leadership of Capatain Isaiah Rynders the gang were used to violently persuade, intimidate and harass voters during elections to vote for the candidates backed by Tammany Hall.

One of the most well known Dead Rabbit gang leaders was “Old Smoke” John Morrissey, who was a champion prizefighter and had a rivalry with Bill The Butcher, in fact Morrissey and others would be brought to trial and acquitted for the murder of Bill The Butcher. Morrissey also would become a Democratic State Senator and member of the U.S. House of Representatives.

The Dead Rabbits also had some other notable names, Kit Burns, who was a notorious saloon keeper and had the famous “Rat Pit” where dog fighting and rat fighting was a popular “sport”. Kit Burns was so notorious that Henry Bergh, founder of the ASPCA personally lead a crusade against him and was present to see Burns being arrested for animal cruelty and overseeing the closure of the “Rat Pit”.

Tommy Hadden was another notorious saloon keeper in the Old Fourth Ward, he ran a “Crimp House” where sailors were drugged, robbed or murdered, and some even Shanghaied, drugged and put onto ships, whose captains were undermanned, when the sailors woke up from the drugs they were usually out to sea and had to work their way back home. Hadden was also one of the saloon keepers who was involved with the Water Street Revival scam.

The scam which was the idea of Reverend A.C. Arnold, founder of the Howard Mission, used the names of the most notorious saloon owners in the area, such as John Allen “The Wickedest Man in New York”, who himself was probably not as wicked as Hadden. The Reverend had claimed that Allen, Hadden and the rest had denounced their old ways and are now part of his congregation and would use their saloons to hold prayer meetings and sing hymns. After the whole revival was investigated by journalists it turned out that the Reverend had been paying all the saloon owners off for the use of their names and saloons, which in turn brought the whole revival to an end .

The Dead Rabbit Riots which was a two day riot that occurred on the 4th & 5th July 1857, where they out-numbered and overwhelmed the police force and was only stopped when the state militias came marching in. What caused the riot, apart from the tensions between the rival Bowery Boys & Dead Rabbits was said to have been support or opposition to the then mayor of New York, Fernando Wood. The Dead Rabbits supported Wood while the Bowery Boys opposed him

An illustration of a real life Dead Rabbit gang member, it was sketched by Frank Leslie for a newspaper in 1857.

The Dead Rabbits were portrayed in the movie Gangs of New York, they were fighting against Bill the Butchers gang.