Fats McCarthy was one Vincent “Mad Dog” Colls trusted associate’s and most trusted trigger man, and had once been one of Dutch Schultz’s men but left Schultz operation when Coll parted ways with Schultz.

McCarthy, who’s real name was Edward Popke, was with Vincent Coll when he was arrested in a hotel in New York along with Lottie Kreiserberger, another associate and his wife. Fats McCarthy escaped that time though by making his way out a window and across the roof. The gang had been in hiding between New York City and Upstate New York. They were wanted in connection to a shooting in which a 5 year old boy died.

On October 19th 1931 patrolman John Broderick was walking along West 78th Street in New York when three men passed him by, believing he recognized some of the faces, he began to follow them, his suspicion was right, it was Fats McCarthy along with Enrico Battaglia, both Coll gangsters, McCarthy was wanted in connection with the death Michael Vengalli while Battaglia was wanted in connection with the murder of patrolman Jerry Brosnon in 1928. Police had missed McCarthy & Battaglia two weeks previous in raids in Manhattan and Albany.

As Patrolman Broderick watched the three men enter a rooming house, he called for back up from officers at West 68th Street police station, within minutes three detectives arrived, Guido Pessagno, James De Farraro & Edward Willi, they instructed Broderick to remain outside while they went in with guns drawn. However the landlady of the house met the three detectives and exchanged words with them “I wont have you cops goin through this house with guns in your hands”. While detective Pessagno managed to calm the landlady, they made their way upstairs. 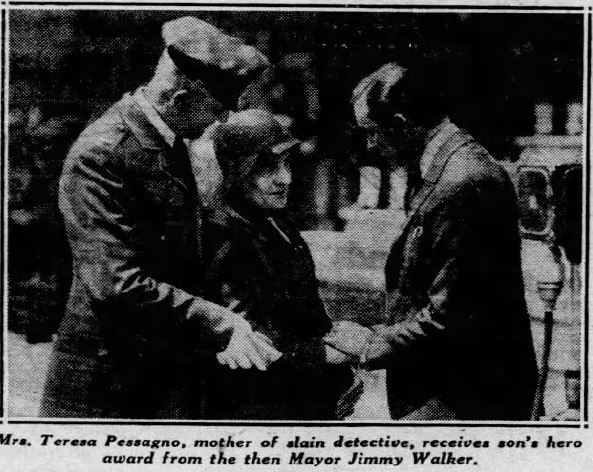 As they got to the 3rd floor the door to an apartment began to close, detective Pessagno threw himself at the door to keep it open shouting “You come out of there” he was answered with a hail of bullets. Detective Pessagno was hit with five bullets and was mortally wounded, he did however manage to return fire and hit Enrico Battaglia, who also died, detectives Willi and De Farraro were both hit in the neck and side respectively. Fats McCarthy and the other man both managed to escape across a roof. 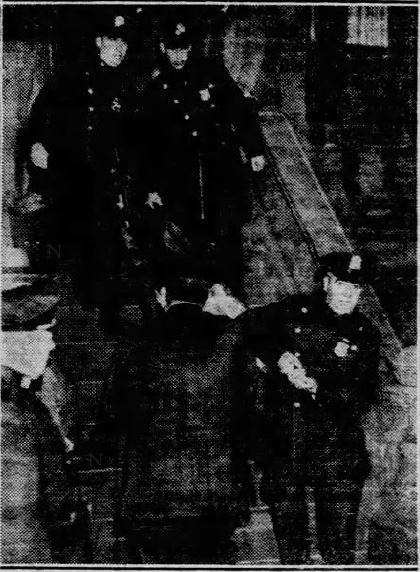 Captain John Appel of 68th Street police station ordered detectives John Riggs and Harold Moore to devote all their time and energy to capture Fats McCarthy. Both detectives were crack shots and fearless “You will get McCarthy if it takes you the rest of your lives” Captain John Appel told them. Both detectives knew McCarthy and his wife Jeanne, who had been accompanying McCarthy while he was on the run. After a search at Jeanne’s family home in the Bronx there was no sign of the couple, they detectives concluded they had left town and headed to Upstate New York.

They heard rumors that Coll & McCarthy had recently linked up with Legs Diamond so they headed for Greene County believing that McCarthy would turn to Legs Diamond for help, they would later be proved right. The first trip for the detectives to Greene County didnt turn up much, they searched speakeasies, rooming houses and places where McCarthy would have been known but there were no leads.

Leaving Greene County the detectives headed to New Jersey, believing Fats and his wife had been inquiring about lodgings in Newark when they received a tip off that McCarthy had been in a house occupied by Legs Diamond in State Street, Albany, however when local police raided the house there was no sign of McCarthy or his wife and the trail went cold. Moore and Riggs continued their search. 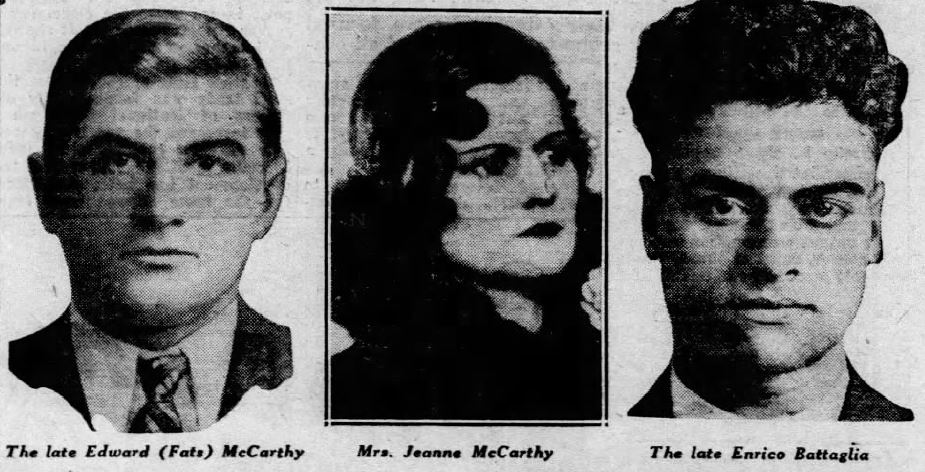 Finally later in the year word came through that Jeanne had been receiving mail in an apartment in Renssalaer, New York but when local police raided the apartment both McCarthy and Jeanne were gone. 8 months after beginning their search for McCarthy they were still no closer to catching him. But a break was on the way. The search focused in the rural area of Albany, the two posing as plain clothes State Troopers visited a grocery store with photos of Jeanne and Fats, the store owner didnt recognize the man but he did the woman, who he said had been in two days previously. Detective Riggs then disguised himself as a store clerk, while detective Moore and a local sergeant disguised themselves as painters. Within two hours a woman came into the store, bought groceries and headed back up the road, detective Riggs now joined Moore and Reilly and followed the woman a qurater of a mile up the road to two bungalows.

All three detectives circled the house, they seen a man outside near a car, which turned out to be Fats McCarthy another man who could be seen upstairs in the house turned out to be another Coll gangster, Mike Basille. As they tried to pounce of McCarthy things went wrong, two boys who had been watching what was going on alerted McCarthy who jumped behind the car and pulled .45 and began firing, hearing this Mike Basille start firing from the upstairs window while the detectives returned fire. Detective Moore was hit by a bullet, Riggs and Reilly took cover in some trees and began firing at Mike Basille in the upstairs window. During all of this Jeanne could be heard screaming inside, the detectives called to her to come out which she did. 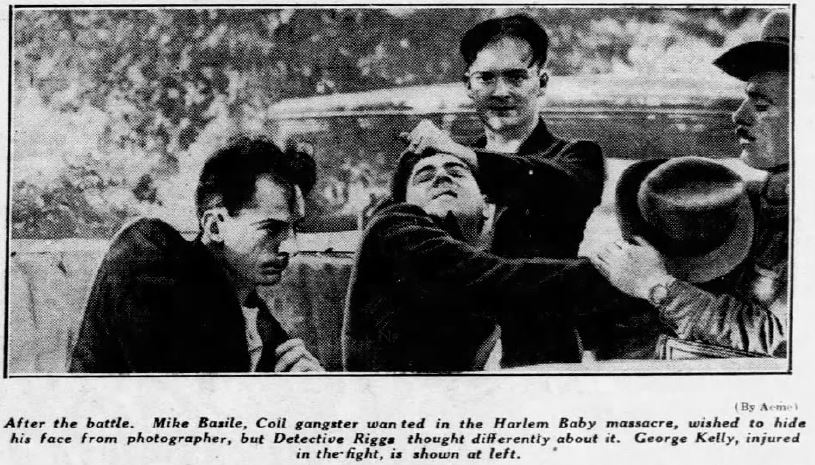 Detective Moore who was exposed to most of the gunfire decided to act fast and made his way to the back of the car where McCarthy was hiding, Moore smashed the cars back window and opened fire on McCarthy shooting him 4 times, once between the eyes, Moore himself had been hit with 5 bullets. Both Riggs and Reilly made a dash for the house, in the process a man named George Kelly, an Albany criminal with a gun in his hand gave himself up after being hit with a bullet in the leg. As RIggs and Reilly made their way into the house, Mike Basille was creeping down the stairs with an automatic gun in his hand, detective Riggs dashed at Basille and after a struggle got the gun from Basille and he was arrested. 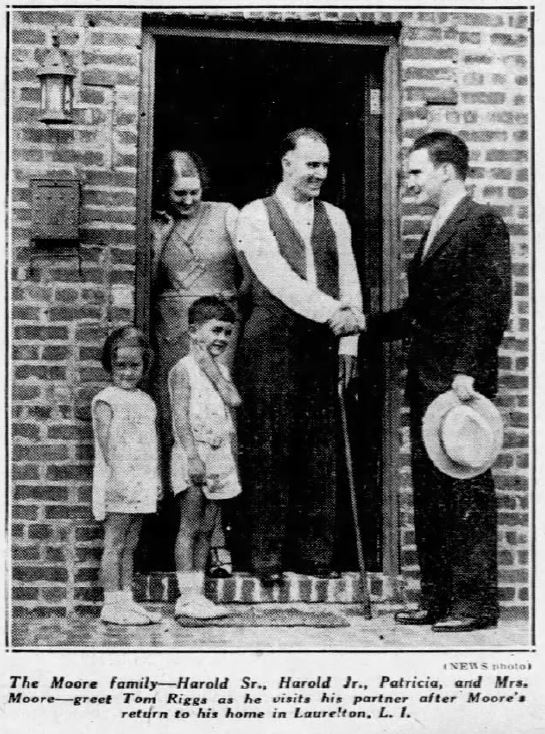 Detective Moore in the meantime had been unconscious and brought to the hospital where he recovered. Both detective Riggs and Moore were promoted to first class detectives and detective Moore was given the Medal of Honor.