The death of Jack “Legs” Diamond 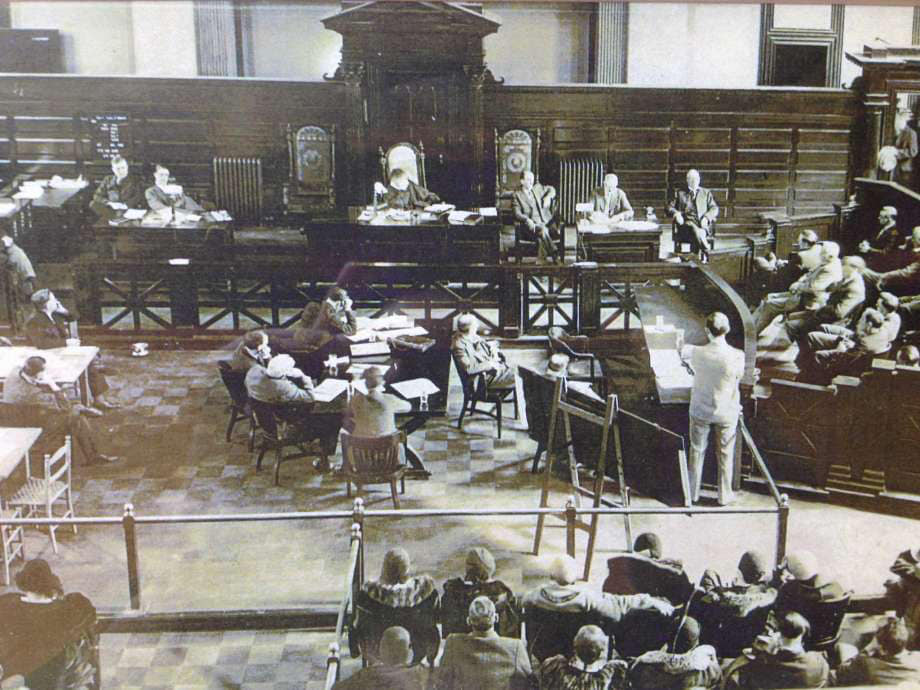 Jack Diamond on trial for kidnapping in Rensselaer County Courthouse, Troy, on Dec. 16, 1931. Jack walked across the street each morning to the courthouse from the office of his lawyer, Abbott Jones, and basked in the adulation of the people of Troy who shouted Jack’s name, cheered and reached out to clasp his hand. “He carried a big wad of cash and he’d peel off bills and hand them out to people. They loved him,” a witness said, “He swaggered through the large crowds of people that lined up on the sidewalks around the Courthouse”.

In this picture, Jack is seated at the center table left of the white-haired attorney, co-counsel Abbott Jones. To Jack’s left is chief defense attorney Daniel H. Prior of Albany. The witness testifying is Grover Parks of Greene County, who is being questioned by Assistant Attorney Gerneral John T. Cahill. Justice F. Walter Bliss of Middleburgh, Schoharie County, presides. Jack’s wife, Alice, is seated in the front row, far left.

The following day, December 17, Jack was acquitted and that night, he, his family and friends were at a restaurant. At 1:00 a.m., Jack went to visit his mistress, Marion “Kiki” Roberts. At 4:30 a.m., Jack went back to the rooming house and passed out on his bed. Some time later, two gunmen entered his room, one of the men held down Jack while the other shot him three times in the back of the head.

There has been much speculation as to who was responsible for the murder; likely candidates include Dutch Shultz, the Oley Brothers (local thugs), the Albany Police Department, and relatives of Red Cassidy, another Irish American gangster at the time. On December 23, 1931, Jack Diamond was buried at Mt Olivet Cemetery in Maspeth, Queens. There was no church service or graveside ceremony. Two hundred family and spectators attended Jack’s interment; no criminal figures were spotted.

On July 1, 1933, Jack’s widow, Alice Kenny Diamond, was found shot to death in her Brooklyn apartment. It was speculated that she was shot by Jack’s enemies to keep her quiet.