The Failed Assassination of Paul Kelly 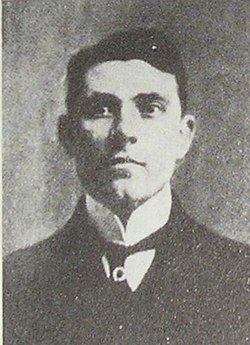 Biff Ellison was one of Paul Kelly’s gang members in the Five Points gang, he started out as a bouncer in Fat Flynn’s dive bar on Bond Street. He later became a bouncer of a bar on Christie street where he made his name by knocking a police officer unconscious with a beer bottle, then stamped on him.

No one knows really what caused Ellison to want to assassinate Kelly some detectives speculate he was offended by not being given a bouncer job which Jack “Eat Em Up” McManus once held.

But Ellison soon teamed up with another gangster, from the Gopher Gang, Razor Riley who also hated Kelly. Paul Kelly had personally thrown him out of one of his bars, which left Riley hugely offended.

While both Riley and Ellison were drunk they began to discuss the idea of going into Kelly’s New Brighton bar and shooting him. the more they got drunk the better it sounded, not only kill Kelly but to also become legends for doing so.

About an hour before midnight they left the bar they were in and headed to the Bowery and to the New Brighton. Paul Kelly was sitting at his usual table talking to friends. The two gunmen stood inside the door for a few minutes and began to move towards Kelly with guns in their hands.

The music ceased abruptly and people on the dance-floor moved out of the way. About twenty feet from the table Kelly’s friend shouted but Razor Riley shot him in the head, while Ellison shot at Kelly and missed, he shot into Kelly’s jacket. Kelly dropped to the floor, rolled under the table and popped up on the other side with a gun in each hand, firing at both Ellison & Riley.

Someone then turned off the lights, for five minutes guns were blazing. Everyone left the building through the doors and windows. Both Ellison and Riley were unharmed but Paul Kelly had been shot 3 times in the body. His men carried him out to the street and brought him to Harlem where he stayed till he recovered.

When the police arrived, the only person who was in the bar was the body of Paul Kelly’s friend that had been shot in the head. Razor Riley went into hiding in Hell’s Kitchen, where he died of tuberculosis before he could be caught. Ellison went into hiding in Baltimore until 1911, he was arrested and convicted on his return to New York.