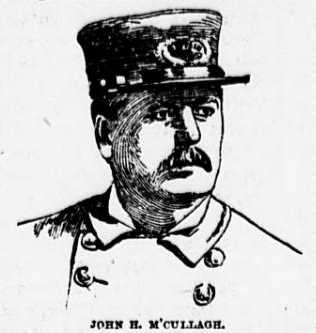 John H. McCullagh  was an officer and police captain in the NYPD, John McCullagh was also known as “Farmer John”. Born in 1842 in Tyrone, Ireland and emigrated with his family the US when he was a child. During his career he battled notorious gangs and river pirates such as the Tub of Blood Bunch & the Battle Row and Hell’s Kitchen Gangs. He confronted the latter gang when their leaders Ike Marsh and Dutch Heinrichs began raiding the Hudson River Railroad yards and express trains. McCullagh is also credited for breaking up of Shang Draper’s gang in the early 1880s.

McCullagh joined the New York City Police Department in 1864, less than a year following the notorious New York Draft Riots. He was assigned to Captain Jeremiah Petty and then Captain George W. Walling during his early years on the police force, at Walling’s Twentieth Precinct, he gained a reputation as a brave officer while he posted in the notorious slums such of the Fourth Ward, Battle Row and Hell’s Kitchen and had notable success against the gangs dominating those areas.

McCullagh was attacked by Dutch Heinrichs and two of his henchmen in Hell’s Kitchen while investigating the theft of ham from a Hudson River Railroad freight car. He battled the three men for over a half an hour before knocking all three unconscious with his nightstick and bringing in the gangsters single-handed to a nearby precinct on West Twenty-Fifth Street. Dutch Heinrichs was the founder of the Hell’s Kitchen Gang which ruled over Hell’s Kitchen during the late 1860s and 70s. Heinrichs was an associate of saloon keepers Boiled Oysters Malloy & Mush Riley. Heinrichs was eventually convicted for and sentenced to ten years imprisonment but became insane while in The Tombs and was eventually committed to the asylum at Wards Island.

John McCullagh earned a promotion to sergeant in 1866 and he was present during the New York Orange Riot of 1871 where he was shot in the leg and became one of the many beneficiaries of the Riot Relief Fund. McCullagh was made a police captain in 1872 and was assigned command of the Seventeenth Precinct, later renamed the Fourteenth Precinct, and was responsible for breaking up Shang Draper’s criminal operations during the 1880s. Shang Draper’s gang had been involved with one of the biggest robberies to have ever taken place in the US, the Manhattan Savings Institution bank robbery of 1878

However he made a number of enemies within the police force also, in one particular incident he shot by ex-police officer James G. Taylor who had been dismissed from the police due to an official complaint made by McCullagh. Taylor attempted to murder McCullagh, ambushing him one night on Ninth Avenue with a pistol, but McCullagh escaped with a minor head wound and a marked ear. Taylor was eventually tried and convicted.

McCullagh’s himself was accused of “improperly influencing keepers of resorts” but these charges were dismissed. When McCullagh died, initially from a sore throat and rheumatism, which made him so sick he could not leave his office, his wife and doctors had to be summoned there, over the next week he grew sicker and eventually died in 1893. He was survived by his wife and two sons and daughter, he left them a small fortune, $115,000, which was a constant source of speculation and controversy throughout his life.