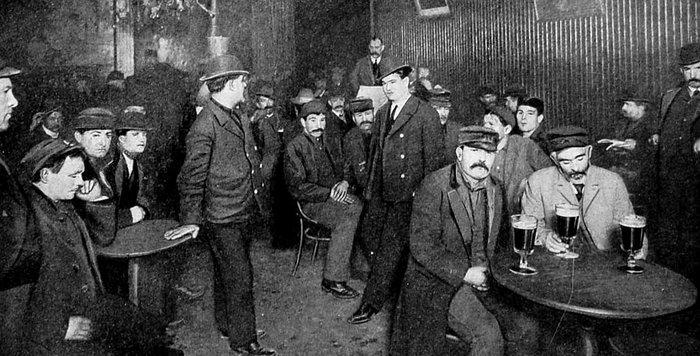 Boiled Oysters Malloy was a criminal and dive bar owner in the Bowery during the mid to late 1800’s, his name as you can guess came from his love of eating boiled oysters, which would have been a delicacy during that period.

Boiled Oysters Malloy seemed to be at his most active from the years 1850 to 1870, when he was an associate of many of the underworld criminals most notably Patsy Conroy and his gang. Although his bar on Center Street which was located near the Tombs prison was a popular hangout for various criminals and the famous Bowery Bums. His bar, a basement dive bar named The Ruins, where three drops of terrible whiskey was sold for a dime.

Another saloon owner and partner of Malloy was known as William “Mush” Riley, who’s bar was located a few doors down from Malloy’s Ruins bar. Riley was a popular and well known Five Points character, who was connected to the other notable characters and criminals of the time. On July 15, 1878, Riley was apprehended by Canadian authorities in Toronto and taken back to the United States where he was charged with complicity in a street car robbery in Troy, New York that had resulted in the garroting of a man named John Buckley. Five others were also arrested for their involvement in the robbery, most notably the group’s ringleader, Will Tomkins.

In one incident at a Hester Street bar involving Malloy, Patsy Conroy, Bill Cummings and Charley Mosher, all four sustained wounds and another Jim Maguire was badly injured. The incident happened when Jim Maguire, who was a known thief, came into the bar where Malloy and the others were drinking, Maguire had obviously been successful in a recent robbery as he had stolen goods on his possession and was in good spirits and offered to buy a round of drinks. Soon an altercation began involving Maguire and Bill Cummings, Patsy Conroy then demanded a cut of Maguires haul. Maguire tried to leave the bar but they stopped him and they began fighting, Boiled Oysters Malloy & Charley Mosher both received minor injuries, Patsy Conroy was shot in the arm while Bill Cummings was shot in the chest. The fate of Jim Maguire is unknown, although you could guess he didnt survive, judging by the injuries sustained by the others.

In the end all four walked away with Maguires haul.