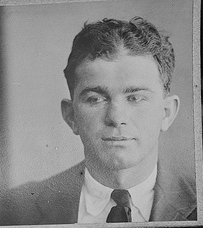 Before there was Whitey Bulger, Pat Nee, The Mullen’s, The Winter Hill Gang and indeed the Mafia in South Boston the Irish Mob was in control.

Frank Wallace was the leader of the Gustin Gang during the Prohibition era in South Boston.

Not only did the Gustin Gang run the booze in the city, they were also involved in other crime such as jewel and payroll holdups. In 1928 Frank Wallace had been identified by two journalists from the Detroit News as one of a gang of robbers had held up the Detroit News payroll in June of that year, the journalists identified him while he was in court being arraigned on charges related to a jewel robbery in Boston. Detroit Police subsequently sent officers to Boston to extradite Wallace back to Detroit to stand trial.

At 11 o’clock in June of 1928 six armed men burst into the Detroit News building holding about 150 employees at bay, with some of the gang jumping onto counters covering the employees with their revolvers. Two of the gang jumped into the cashiers cage and helped themselves to roughly $40,000 cash. The escape didnt go to plan, a shootout occurred between some of the gang and some traffic police, around a dozen shots were fired in total but one of the traffic officers died while another was injured, an employee of the Detroit News was also injured in the shootout. Stephen Wallace, Frank’s brother was arrested in Detroit shortly after but was let go after 24 hours. Apart from the extradition of Frank Wallace from Boston, police were also looking for more people from South Boston, including a woman.

Wallace ran the rackets in Boston until, agreeing to a “sit down” with Italian mobsters Joseph Lombardi and Phillip Bruccola to resolve the recent hijacking of beer shipments by the Gustins, Frank Wallace and Bernard “Dodo” Walsh were ambushed and killed as they entered their rivals’ headquarters at the C.K. Importing Company on December 22, 1931.

The Italians were then in control of Boston until the 1950s. After this the emerging Irish gangsters James “Buddy” McLean, Bernard “Bernie” McLaughlin, and other Irish gang leaders broke away from Mafia control and took over the rackets.

For the next 30 years, the Winter Hill Gang would be the top gang of the area.