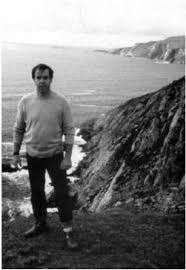 A Boston tough guy & member in the Mullen gang. He was a one time enemy of Whitey Bulger, they had both tried to kill each other a few times during the Boston Gang Wars in the 1960’s

He had emigrated from Connemara, Galway, Ireland when he was young with his family, they settled in Boston but he kept his links with Ireland alive and well. He had travelled back to Ireland a couple of times, this photo was one such trip when he returned home with his family. On one of his last trips home he came back to meet the leadership of the IRA to discuss arms shipments and to take orders for what weapons they needed.

When he returned to Boston he went about getting the weapons that were needed, at first he came up with a plan to send some rifles, handguns and ammunition in the bottom of coffins that were being sent home to Ireland to be buried. Soon after they needed to send more weapons and bigger amounts of them. They then bought a boat to send across the Atlantic loaded with 7 tonnes of weapons.

The boat was named the Valhalla, it was caught on its maiden voyage, due to an informant. The FBI agent John Connolly gave the name of the informant to Whitey Bulger, the informant was dealt with and murdered.