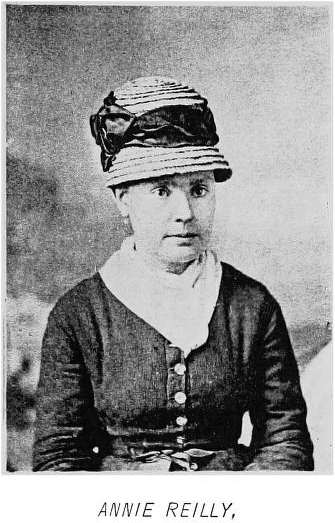 Little Annie Reilly also known under the aliases Kate Cooley, Connelly and Manning she was a thief and con artist widely regarded as “the cleverest woman in her line in America”

She was also one of Fredericka “Marm” Mandelbaums elite inner circle during the 1860’s & 70’s. Other notable characters of Mandelbaums inner circle included some of the most notorious thieves, blackmailers and confidence women in the country such as Lena Kleinschmidt, Sophie Lyons, Kid Glove Rosey, Queen Liz, Big Mary and Old Mother Hubbard.

Annie Reilly was born in Ireland in 1844. She later immigrated to the United States and settled down in New York City where Reilly found employment as a servant and child’s nurse. She was said to look much younger than her age and was both charming and intelligent. She is thought to have been able to speak two or three languages.

Once gaining the confidence of the lady of the house, most often by making “a great fuss over the children”, she would rob the house of its valuables, usually jewelry, sometimes leaving with sometimes as much as four to five thousand dollars. She rarely stayed in one place for long, waiting only one or two days before robbing her employers

In early-1873, Reilly was finally apprehended in New York after robbing the home of Mrs. A.G. Dunn among others. She was convicted of grand larceny and sentenced to 4 1/2 years in New York State Prison. She was then using the name Kate Connelly.

Three years after her release, she was again arrested for stealing from the home of Mrs. Evangeline Schwarz. She was convicted under the alias Kate Cooley, and sentenced to three years imprisonment on Blackwell’s Island.

She immediately returned to her criminal activities following her release from prison. Reilly remained active in and around New York and, while employed at the New York Hotel, was responsible for the theft of $3,500 worth of jewelry and other valuables from guests.

As of 1886, she had stolen more property in the last fifteen years than the next four other female thieves in the United States combined.