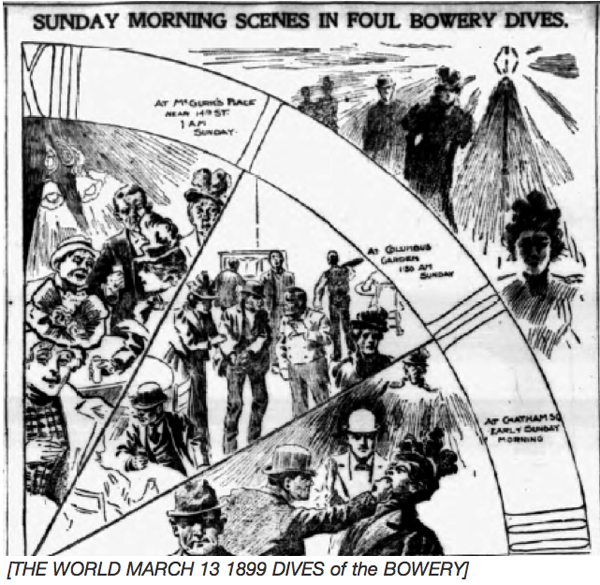 McGurks Suicide Hall located at 295 the Bowery in New York was a notorious dive bar and hotel run by John McGurk a native of County Antrim, Ireland. McGurk owned a string of saloons, each one closed down by the police, however his saloon at 295 Bowery would become his most infamous. McGurks Suicide Hall was the scene of 6 suicides and 7 attempted suicides throughout its history, giving the hall its unique name. 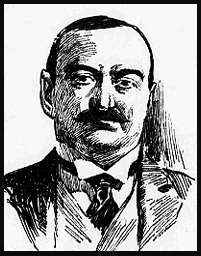 After the Civil War was over a hotel was opened at 295 Bowery for returning soldiers. It was a red brick structure with limestone trim, attractive heavy solid stone lentils and a rather ambitious cast metal cornice. By 1880 it was Steuben Hall, the headquarters of the political group, the German Republic Central Committee. The respectable atmosphere of the hotel, however, would be short-lived. 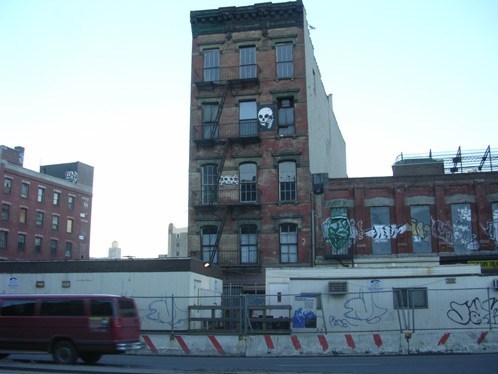 The address at 295 Bowery where the tall skinny red brick building once stood wouldnt become famous for its architecture or design, but for the dive bar that it once inside it. The John “McGurk’s” Resort was widely known throughout New York for its debauchery, cheap booze, fighting, Mickey Finn drops, murder, and suicide from 1883-1902.

Even before it became the “Suicide Hall,” McGurk’s already had a reputation as being the lowest place even the most degraded of society could end up.  What made McGurk’s stand out from the rest of the dive bars in that viper’s nest known as The Bowery, were the soiled doves. Should a woman find herself tangled up in the prostitution racket and find herself at McGurk’s, it was considered the last stop to nowhere. 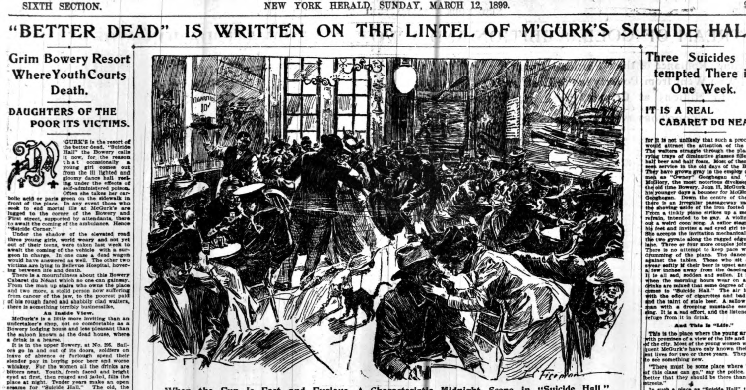 By the 1890’s prostitution and gambling was moving from the dives and saloons of the Water Street area to the Bowery. In the balconies of many of the Bowery theatres, which catered to a lower class audience than those in the 23rd Street theatre district, prostitutes openly plied their trade. Sailors searched the seedy saloons for the harlots who haunted them. It was the sort of environment that attracted John McGurk.

McGurk’s Saloon earned an immediate reputation as the most degraded spot on the Bowery. The bartenders were thugs and thieves and the prostitutes who ended up at here had fallen as low as they could go. Indeed, Suicide Hall’s bartender went by the name of “Short Change Charlie” Steele, who was once arrested for murder, kept a bottle of chloral hydrate behind the bar, which he used liberally on unsuspecting customers, who usually woke up in the back alley a day later and many dollars short.

The bouncer who worked in McGurks went by the name of “Eat ’em up Jack McManus”. Born in Boston in 1862, McManus was seemingly destined for underworld like his older brother, the international safe cracker, Kid McManus. Unlike his brother though, Jack earned a living with his fists from the beginning, eventually following his knuckles to New York City. McManus was a lightweight boxing champ and prizefighter, he was legendary for beating his opponents with his big hammy hands. McManus was also associates with Paul Kelly, the leader of the notorious Five Points gang. 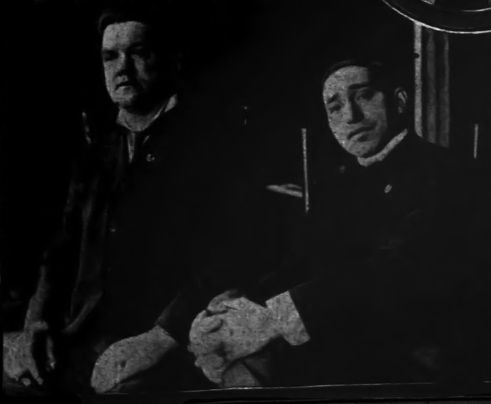 Paul Kelly hired Eat ‘Em Up Jack as bouncer at Kelly’s Little Naples Café and New Brighton Hall. McManus had a rivalry with Chic Tricker a member of the Monk Eastman gang. One night Chic Tricker drunkenly wandered into Kelly’s club and insulted the showgirls. McManus stepped in, throwing Tricker out of the bar. During the scuffle, a challenge was issued later that night, Eat Em Up and Tricker traded pistol shots under the shadow of the 3rd Avenue Elevated Line, Jack put two slugs in Tricker’s leg and walked away unscathed. But Tricker swore revenge. The next day Eat ‘Em Up was walking through the Bowery. Just as he got to the corner of Bleeker Street, a burly hoodlum named Sardinia Frank stepped from the shadows clutching a gas pipe wrapped in newspaper and hit McManus on top of the head. McManus died in Belleview Hospital.

1899 was the year when six ladies took their own lives and another seven attempted suicide. These girls, all prostitutes, either threw themselves out from the 5th story window or, in a more grizzly turn, ingested carbolic acid. This acid played a role in the famous suicide of Blond Madge Davenport and the disfiguring of Big Mame. Both were prostitutes who were regulars at McGurk’s, and both decided to commit suicide by drinking carbolic acid. Blond Madge succeeded in her attempt but Big Mame ended up spilling the acid on her face instead, leaving her permanently disfigured and barred from McGurk’s establishment. McGurk threw her out onto the street because she was scaring the customers.

As a result, in a callous bit of marketing McGurk decided to capitalize on these and the other suicides by renaming his establishment “McGurk’s Suicide Hall.” 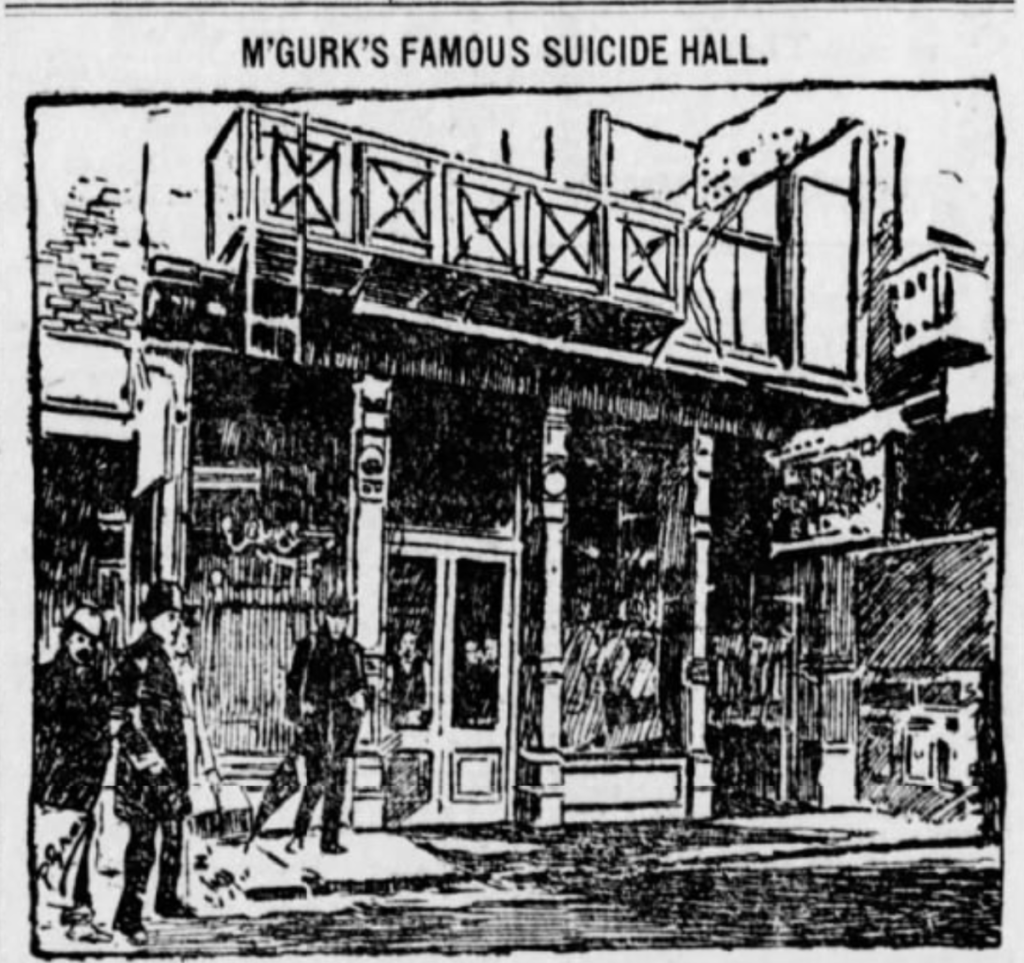 Because of the establishment’s reputation and shady dealings, McGurk faced pressures from the police, community leaders, City Hall, and even New York City Police Commissioner Teddy Roosevelt. The overt illegal activities of McGurk and his crew eventually became too much to ignore. Bartender William Strauss and McGurk’s nephew, Philip McKenzie, noticed an intoxicated patron, Samuel Cohen, stumble out of the bar on March 11, 1900. The New York Times reported “…as he left the two men followed him up the Bowery and attacked and robbed him at the corner of Bleecker Street.” Judge Newburger had had enough of Suicide Hall.

On March 23, 1901 the police raided Suicide Hall. “McGurk’s was in full blast,” reported The Times. “The place was crowded. Men and women were drinking and smoking. Sailors and all kinds of people were there and dancing was going on with the rest of the amusements when the police startled everybody by rushing in…Then Col. Monroe indicated the men he had warrants for, and they were placed under arrest and taken to the station house by some of the policemen.”

Eventually, with a $1000 bail on his head, McGurk and his wife and daughter skipped town and went to California with half a million dollars in cash. McGurk died of heart failure in 1913. 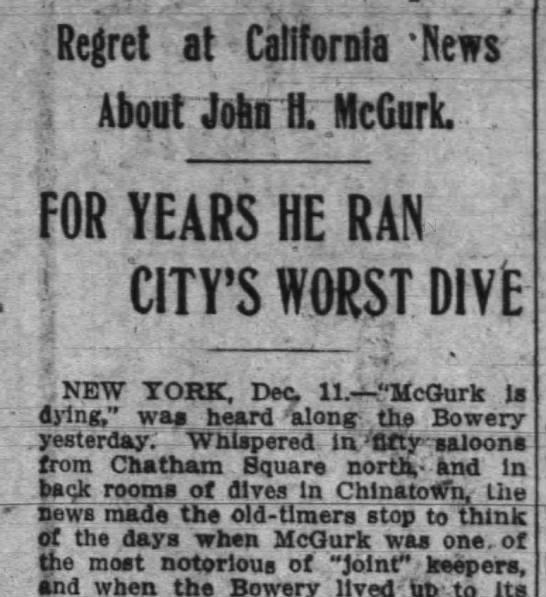 But it wasnt the end of the establishment, for forty years after it ceased being the Suicide Hall it was Liberty Hotel, a cheap place to stay for Bowery men down on their luck. In the 1960’s it was taken over by four female artists took over the building turning it into an artists co-op for the next forty years until it was eventually pulled down to make way for a modern glass building, the Avalon Bowery Place. 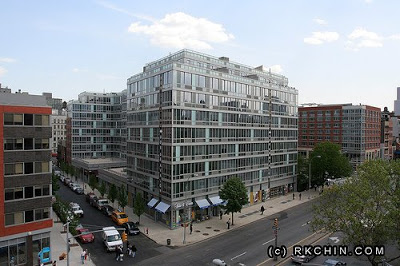