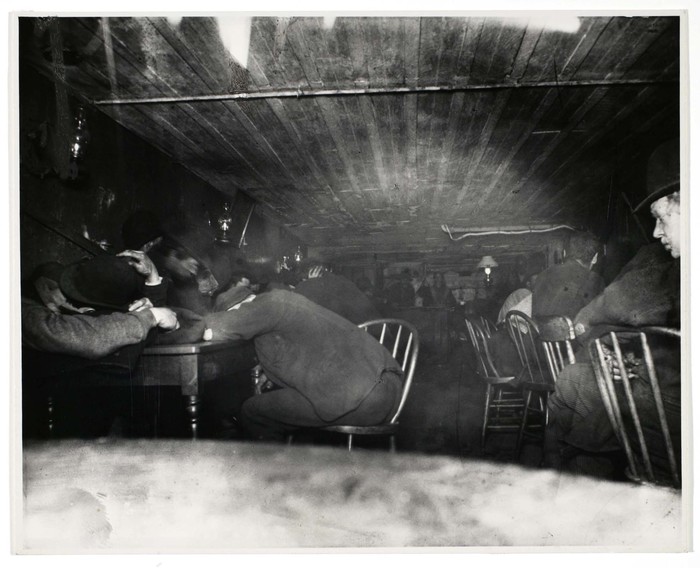 Patrick “Burly” Bohan was a saloon keeper and owner of The Doctor’s, a popular Park Row dive bar, which was also a hotel of sorts and hangout for panhandlers and professional beggars known as the “Bowery Bums”

The dive bars around the Bowery, Five Points & Hells Kitchen were gathering points for gangsters, murderers, pickpockets etc Many of his patrons “preyed upon the public by simulating cripples” and “Burly” Bohan, according to author of the book Gangs of New York Herbert Asbury, provided a locker for storing crutches and canes while these panhandlers spent their money on alcohol and liquified camphor.

Whiskey was sold for 5 cents for a large glass and the cheaper mixture of water and camphor, which by all accounts was a fierce mixture. They could also buy hot punch which was a foul mix of whiskey, rum, camphor, benzine and cocaine sweepings, which is said to contain a case of delirium tremens in every drop, that sold for 6 cents a glass.

One of the best known Bums of the time was Tom Frizzell, known as the king of the panhandlers. Another one of the famous Bowery Bums who was a resident at the Doctors dive bar was Jack Dempsey. Jack earned his nights lodgings by washing glasses and scattering sawdust on the floor. Jack Dempsey was the lowest in the order of Bums he was a camphor fiend, when he could afford whiskey he would add 8 or more drops of camphor to it.

“Burly” Bohan himself is described as living somewhat extravagantly wearing “flashing diamonds on his shirt bosom”.

On the morning of July 25, 1904, an argument started between “Burly” Bohan and his bartender Jerry O’Connor which resulted in a barfight that involved at least eleven other customers.

The argument began when the two started arguing over O’Connor’s wages and as it became more heated, O’Connor pulled out a revolver and shot Bohan twice. One shot hit “Burly” Bohan in the right side of the head and a second one to the left hand.

The bar which had been filled with customers at the time, all of them friends of Burly Bohan, immediately set upon O’Connor. They all “helped in treating O’Connor about as badly as they could” as the bartender was “hustled from one place to the other, and punched and kicked”. By the time the police arrived, O’Connor had been beaten unconscious.

The two shots had been heard by detectives McDonnell and Maher of the Oak Street Precinct who ran to the hotel where they had to force their way inside with drawn revolvers. After breaking up the fight, they had a patrolman call for an ambulance to take both men away. One eventually arrived from the Hudson Street Hospital. Both Bohan and O’Connor were charged by police, O’Connor for felonious assault and Bohan for misdemeanor assault, while all involved were arrested as “suspicious persons” and held as witnesses. One man, local printer Frank Murphy, was charged with disorderly conduct.