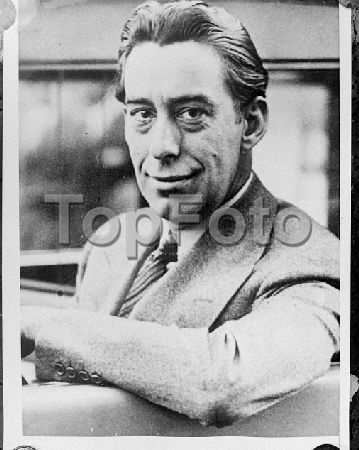 Larry Fay was the owner of one of the most famous clubs throughout the entire Prohibition Era, the El Fey Club but would meet his demise in 1932 at another ones of his speakeasy clubs, the Casa Blanca Club.

Not much is known about Larry Fay’s early life, he was born in 1888 and his first arrest was in 1911, by the end of the decade he would be arrested a further 47 times, mostly for traffic violations.

According to some, Larry Fay took great pride in his fashion sense, he was flashy dresser with a liking for indigo blue shirts and loud bright neck ties. He had his clothes tailored in London’s Bond Street and wore a bullet proof vest under them. A reporter once described him as the Beau Brummel of Broadway.

Fay had become a player in the Prohibition Era gangland through his early rum running exploits, bringing alcohol over the Canadian border by 1922, Fay had amassed a half million dollars from this venture, but was said to have little stomach for the rough and tumble of bootlegging. A year later he got out of the business. He was also made a lot of money because of his legendary 100 to 1 shot at the Belmont Race Track, which he invested and bought a fleet of cabs.

Fay hired mobsters from the Westside of Manhattan to help him eliminate his competition he became friends with Owney “The Killer” Madden who had been leader of Hell’s Kitchen Gopher Gang, through the taxi business. Fay soon had control of the two most profitable cabstands in Manhattan; Grand Central Station and the Pennsylvania Station. Madden’s muscle kept Fay on top until 1923 when he sold out to a competitor. Madden himself was looking to expand his bootlegging business and hooked up with Fay to go into the nightclub business. The nightclubs would be selling Maddens No.1 beer and alcohol smuggled in on “Big Bill” Dwyer’s rum runner boats

Fay opened the El Fey nightclub on West 54th Street in 1924, which would introduce another character and would soon become queen of the nightclubs, Texas Guinan. Texas Guinan was a star of the stage and silent movies at the time and she had her own production company in Hollywood before coming to New York just as Prohibition was starting to get underway. Larry Fay offered to feature her at the El Fey club, it was there she would come up with her famous catchphrase “Hello, Sucker! Come on in and leave your wallet on the bar.” Guinan would receive 50% of the profits. Texas Guinan made the El Fey one of the hottest night spots in the city and helped initiate Manhattan’s “Night Club Era.” When authorities closed the El Fey Club, Fay moved a few blocks away and opened the Del Fey Club. 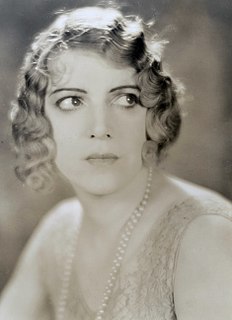 The money rolled in for Fay during the years from 1925 to 1929. With his flamboyance, Fay became one of the most recognized figures on Broadway.

In 1929, Larry Fay became involved in the New York Milk Chain Association. In the late 1920s, two dairy giants handled nearly all of the bottled milk in the city. Fighting for the scraps were 300 small independents of which Fay helped organize 94 into a competitive group. Fay, still riding high at the time with his Broadway playboy image, was uneasy in this new venture. He soon took to wearing bulletproof vests under his flashy clothes and drove around in a bulletproof car. Fay was making $900 a day by mid-1930 from this racket when the state attorney general began looking into his activities. An investigation resulted in an indictment of Fay and 71 others including Waxey Gordon, Owney “The Killer” Madden, Dutch Schultz . Fay was acquitted and then bowed out of the association.

But Larry Fay would meet his ending in one of his nightclubs, The Casa Blanca Club. In 1932, the club cut employee salaries by 30 percent and hours were scaled back. On New Year’s Day 1933, Edward Maloney, a disgruntled doorman who had suffered the cut backs, showed up at the club around 8:30 p.m. He was drunk, angry, and armed. After exchanging words with Fay, Maloney pulled a revolver from his coat pocket and shot Fay four times at close range, killing him instantly. 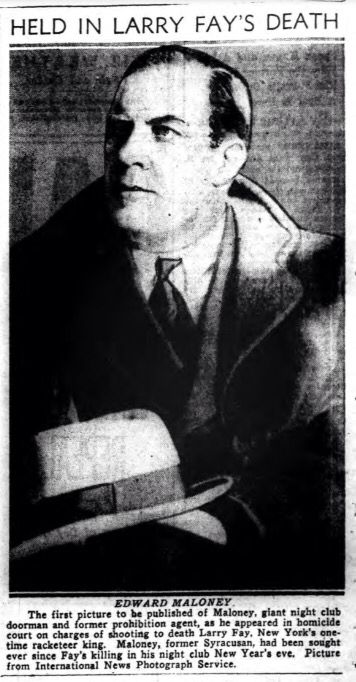 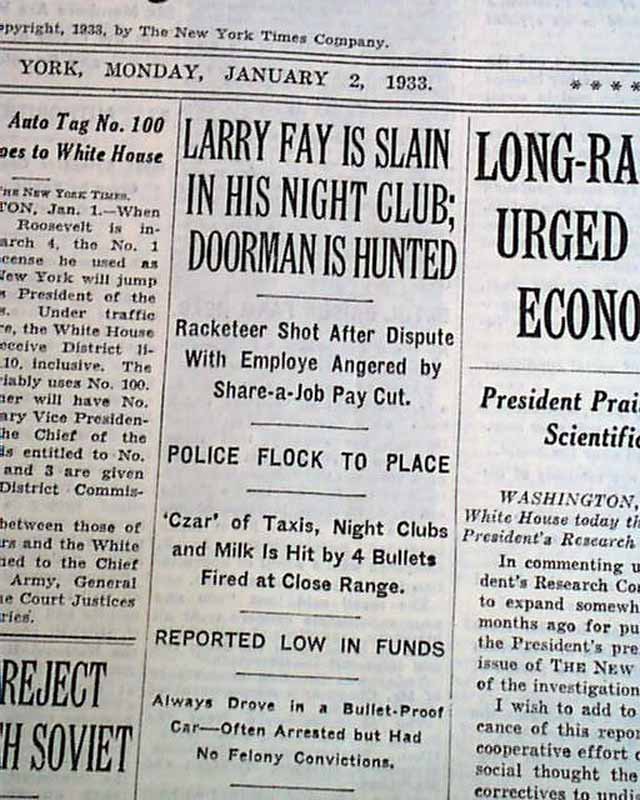