The Gopher Gang of Hell’s Kitchen 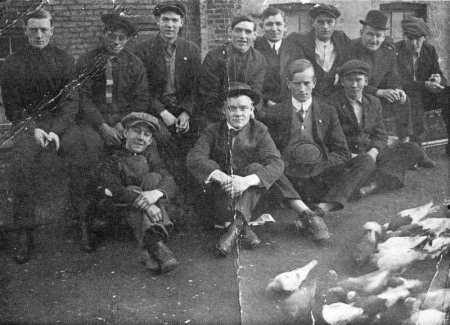 The Gopher Gang were one of Hell’s Kitchen’s most brutal gangs. They were given the name “Gophers” because they used to hide in the cellars of buildings in the neighbourhood. The Gophers formed in the 1890s and went on to rule the West Side between Ninth and Eleventh Avenues around 42nd Street through to the early 1900’s.

Some of their prominent members included One Lung Curran, Happy Jack Mulraney, Stumpy Malarkey, and Goo Goo Knox. Gangsters back then had some colorful names. Goo Goo Knox would leave the gang to join their bitter rivals The Hudson Dusters after a failed take over of the Gophers.

But probably the most well known member would have been Owney “The Killer” Madden, sitting in the middle of the back row of the photo, leaning forward. He’s responsible for numerous deaths of other gang members, especially from the rival Hudson Dusters.

Madden was a crack shot with a revolver and equally as good with a Blackjack, Brass Knuckles, Slung Shot and one of the favourite weapons of the time a lead pipe rolled up inside a newspaper. The police of the time identified him as a typical gangster, cruel, cold blooded and lazy.

When under questioning by New York detectives, they asked him to describe how he spends his time, he wrote down exactly what he did, but was careful enough to leave out anything that might incriminate him. Below is what he wrote for the detective.

Friday – Spent the day with Freda Horner. Met friends in a saloon early evening, stayed with them till 5 am.

Saturday – Slept all day. Went to a dance in the Bronx late in the afternoon, went to another dance on Park Ave that night.

Sunday – Slept till 3 pm. Went to a dance in the late afternoon and another in the same place that night. Went to a cabaret and stayed till early morning.

Annie Walsh also known as Battle Annie, was a criminal and member of the Gopher Gang, she was leader of the Lady Gophers.

She was a well-known criminal described in the press as “The Queen of Hell’s Kitchen” and “the most feared brick hurler of her time” she was the founder and leader of the Lady Gophers, headquartered at Mallet Murphy’s Battle Row saloon where they were officially known as the Battle Row Ladies’ Social and Athletic Club.

She was able to assemble a force from 50 up to several hundred women who, armed with clubs, were used as reserve members in gang fights against rival gangs and police. Walsh and her group were also hired out by businesses and labor unions throughout a number of violent labor disputes during the 1890s.