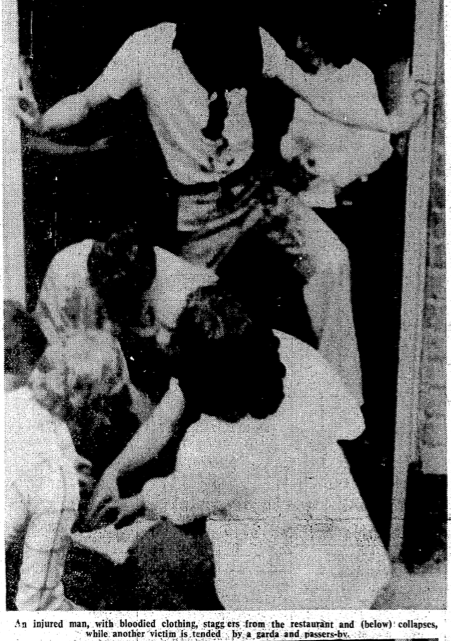 In one of the most unusual gang wars Dublin or Ireland has ever seen came in July 1979, when a bloody street battle raged and two lost their lives, one was blinded for life and many others were injured. It was unusual in the fact that you wouldnt normally associate Triads with Dublin or Ireland for that matter but they do exist but mainly in the shadows.

It is believed that it all started some months previous to the actual fight, a network of linked gangs from Cork, Belfast & the U.K tired to muscle in on the Dublin Triads protection racket. On the night in question two cars pulled up outside the New Universal Chinese restaurant and about seven young men went into the restaurant.

After a few minutes, arguments began inside the restaurant and the young spilled out onto the street, movie goers who were coming and going from the Adelphi & Curzeon cinema’s on Middle Abbey Street in Dublin City Centre had to flee as the fighting began. The Adelphi cinema was historic in itself, it once hosted The Beatles only performance in Dublin but according to the manageress of the Curzeon cinema said the scene on the street was “much worse than any Kung Fu film we ever shown here”.

During the fight an array of weapons were used, .22 long rifle, meat cleavers, kitchen knives and iron bars as the gangs fought in the middle of the street. Michael Tsin who was 26 and in the Dublin faction was shot dead by Tsoi Foh Sing of the Cork faction, Sing would be charged but later acquitted of the murder.

Tony Lee of the Cork faction, who was allegedly a big boss in the 14K triad group had his throat slashed during the fight, died shortly afterwards. His wife, Louise Lee, denied that he had anything to do with the Triads.

During the trial at the Central Criminal Court in 1981 it was discovered that tensions had been rising between the two groups for a few months before the fight. It was alleged that one group had been demanding protection money from the other group who ran a restaurant on Dorset Street. There had also been a fight recently between members of the two groups outside the National Stadium after a martial arts exhibition.

There was further trouble between the groups again in August 1983 when twelve members of the 14K triad group were arrested in Limerick in connection with the attempting to extort money from the owners of Chinese restaurant in the city. Nine of the men were believed to have come over from the U.K. During the operation a hoard of weapons including knifes, pickaxes, bars and clubs were found.

Later newspaper reports suggested that the 14K, Sing Woo and Shui Fong Triad gangs were all operating in the different parts of the country.