The Murder of Mossy Enright 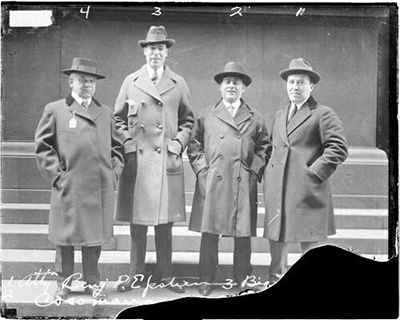 L-R: Judge John Sbarbaro, ”Big Tim” Murphy, Vincent ”Jim” ”Sunny Jim” Cosmano, Benjamin Epstein.
While Mossy Enright was stepping on toe’s around the union’s in Chicago he made some powerful enemies and tensions flared. They came to a head one night in 1920 at the Vestibule Café in the Levee district.
Mossy Enright had a rivalry with “Dago Mike” Carrozzo who was “Big Jim” Colosimo’s bodyguard. “Big Jim” Colosimo was one of the most powerful gangsters in Chicago the time.
Enright and Carrozzo met one night at the cafe, Enright attacked Carrozzo and some of his associates, but the bullets missed their mark.
At a meeting in Colosimo’s Café, “Dago Mike” Carrozzo and two heavies, Frank Chiaravaloti and “Big Tim” Murphy, planned the murder of Enright. They hired “Sunny” Jim Cosmano, a former “Black Hand” extortionist to assassinate Mossy Enright.
“Sunny” Jim Cosmano had a interesting past himself, he had been shot by John Torrio in 1912 for trying to extort “Big Jim” Colosimo, It had been because of Cosmano that Torrio had come to Chicago in the first place.
On the night that Mossy Enright was murdered, a car had followed him home, as he parked in front of his house a car pulled up next to him. Allegedly, Cosmano fired twice from a sawed-off shotgun killing Enright.
“Big Tim” Murphy served two terms in the Illinois State Legislature and was still a politician when him and Mossy Enright were associates, they had connections through the lucrative labor union rackets. But they had a major dispute, which lead to Murphy being a suspect in his murder.
Cosmano, “Big Tim” Murphy & “Dago Mike” Carrozzo were all brought in as suspects but they all had alibi’s and were let go. Mossy Enright’s murder is still officially unsolved.
“Big Tim” Murphy himself would be murdered in 1926 when he went to answer his door and a gunman opened fire on him. John “Dingbat” Oberta, Murphy’s friend would married Murphy’s widow a year later.
However, “Dingbat” Oberta would also be murdered allegedly at the hands of Frank McErlane. Oberta had also been a politician, had gained mobster status by running alcohol for the Saltis-McErlane gang during Prohibition and had been acquitted of murdering John “Mitters” Foley in 1926, along with Frank McErlane.

← A Grizzly Murder in The Hauge Weapons – The Awl →