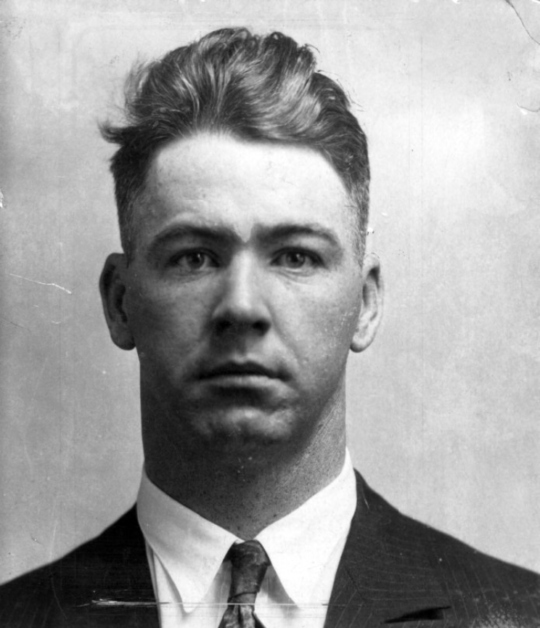 Tommy “The Rock” Hayes was a one time boss of St. Louis’ Cuckoo Gang, briefly from 1930 – 1932. St Louis’ Gangs had many gangs who were highly active during the Prohibition Era, The Cuckoo Gang, the Green One’s, the Pillow’s Gang and the main two gangs Egan’s Rats & The Hogan gang. At one time or another they were all at each others throats, fighting over the rackets and profits from selling alcohol.

The roots of the Cuckoo gang goes back to the earlier 20th century and a gang known as the Bottoms gang. The Bottom’s gang were primarily involved in voter intimidation, armed robbery, assault, the numbers game (illegal lottery), and murder. The Bottoms gang went to war with the much larger and powerful Egan’s Rats, who practically wiped them out, along with most of the rest of the gang being arrested and jailed by 1917. The remnants of the Bottoms gang joined up with the Chouteau Avenue Gang and would eventually become the Cuckoo Gang

The Cuckoo Gang mainly held territory in East St. Louis, which was also territory that the Bergir & Shelton gangs fought over. During Prohibition, Cuckoos operated their stills in the East Side territory. But bootlegging and extortion rackets werent the only crimes the Cuckoo’s would engage in, they also were involved in kidnappings.

Tommy “The Rock” Hayes was identified as being the ringleader of one such kidnapping in St. Louis. The Kidnapping of Dr. Isaac T. Kelley, a physician in the city. At around 10 pm on 20 April 1931, Dr. Kelley received a phone call at his home by a person named Holmes, who asked Dr. Kelley to come to his home. As Dr. Kelley arrived, a man entered the car, put a gun into Dr. Kelly’s side and told him to drive, a short time later he was forced into another car along with some other kidnappers.

For the next week Dr. Kelly was moved to another house, where he was permitted to read magazines and sit in a chair. On one occasion, a kidnapper asked Dr. Kelley if the doctor could “play his typewriter”. Dr. Kelley said he could not, causing the man to shove a Thompson machine gun through the door’s crack. When asked how he liked the “typewriter,” Dr. Kelley claimed he coolly replied, “It looks very nice….I haven’t seen one since the war.”

On the 28th of April Dr Kelley was finally released, a journalist from the St. Louis Post Dispatch was given the location of where to find Kelley, a rundown gas station, where he was found alive.

In the years following his kidnapping, various men and women were accused of being involved in the kidnapping, Tommy “The Rock” Hayes being the ringleader. Some of them were killed in “gang warfare” before the trial began. One man, who had confessed and began cooperating with police, was murdered in a drive-by shooting as he sat on the steps of a sheriff’s home. Tommy Hayes and two others were killed in Illinois in a volley of bullets, its believed he was killed by the Shelton Brothers gang.

A Doctor, A Reporter, and A Kidnapping: A Physician’s Abduction in Prohibition Era St. Louis