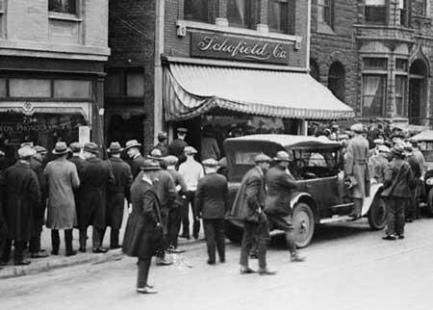 Crowds gather outside of Schofields Flowershop located at 738 North State Street in Chicago, Illinois, its legitimate owner was William S. Schofield but was a front for mobster Dean O’Banion who had just been murdered there minutes previously.

Dean O’Banion had been inside Schofields arranging flowers for the funeral of another high ranking mobster, Mike Merlo who was also president of the Unione Sciliana organization.

Three men entered the flowershop and O’Banion had approached them saying “Hello boys, you here for Merlo’s flowers, O’Banion extended his hand for a handshake. An employee in the store and best witness William Crutchfield, seen the three men enter and described them as two Italian men “who were short, stocky and looked rough” and the third man as “tall, well built, well dressed, smooth shaven, wore a brown overcoat and brown hat. He might have been a Jew or a Greek”. The employee, assuming O’Banion knew the men went into the backroom and around 15 minutes later he heard shots fired.

Outside the shop three boys who were going home from school for lunch, had stopped outside when the door burst open and three men ran out, one boy was pushed onto the ground by the first man to leave the shop, who he described as wearing a blue suit and blue hat and another of the boys was also pushed over by the third man who was wearing a brown overcoat and brown hat who looked older than the other two men.

The boys got on their feet and ran back to the school to get help, while the other boy followed the men who were running away and turning onto Superior Street, the boy said “When I got to the corner, I saw them get into an automobile that was parked at an alley on State Street. A woman was at the wheel of the car, with the doors open for the men” He described the woman as wearing a black veil with a brown coat and fur collar.

Back in Schofields Father O’Brien and Father Morrison had arrived, having been alerted by the two boys who had ran back to the school. However Dean O’Banion was dead having been shot five times in the head, neck and chest, the priests gave the last rites.