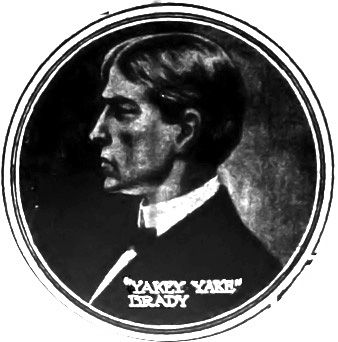 John or James “Yakey Yake” Brady was the founder and leader of the Yakey Yakes, an independent street gang based in Manhattan, New York at the turn of the 20th century.

Under his leadership, the gang, which had its base around the Brooklyn Bridge, operated freely within the territory of the Eastman Gang and successfully fought off attempts by both the Eastmans and the Five Points Gang to absorb the Yakey Yakes into either organization. Only following Brady’s death from tuberculosis did the gang finally disappear.

Brady was born and raised in the Irish enclave of Cherry Hill known as “the Gap”. He worked as an apprentice jockey in his youth, but became too heavy to turn professional. Returning to “the Gap”, he joined the Cherry Hill Gang.

It was around this time that he was given his familiar nickname during an altercation with a German-American saloon-keeper who, “suffering from a battered nose”, mispronounced Brady’s first name as “Jake” or “Yake”.

He eventually deserted the Cherry Hill Gang when they moved their headquarters to Chatham Square, reorganized as the Five Points Gang and moved into more violent crime such as theft and armed robbery.

Brady formed his own gang, the Yakey Yakes, made up of “rough but fairly honest young fellows” from his own neighborhood. Brady and the Yakey Yakes were confronted by both the Eastman Gang and the Five Pointers under Paul Kelly, as were Al Rooney and his Fourteenth Street Gang, and defeated them in street fights on several occasions.

On the night of June 27, 1904, Brady was arrested with two other men, John Sexton and George Emptage, after a gun battle on Cherry Hill and taken to the Oak Street Police Precinct. Police believed that the three were rivals for leadership of Brady’s gang.

A few weeks prior to the arrest, Emptage had been attacked by Brady and his friends and had barely managed to escape. Brady and Sexton were walking down Roosevelt Street on the night in question when they encountered Emptage who immediately drew a pistol and fired at them.

Brady and Sexton returned fire, and soon the shootout had attracted a large crowd. The gunfire had also been heard by officers in the nearby Oak Street Precinct and acting Police Captain Fennelly went to investigate taking with him officers Voss, Healey, Toumy and Cohen.

By the time they arrived on the scene, it was “only by the free use of their clubs” that they were able to make their way through the large crowd to arrest the three men. Fennelly had to call for police reserves to disperse the crowd.

Yakey Yake Brady died of Tuberculosis in September 1904, the gang disappeared soon after, presumably taken in by the Eastmans and Five Points gangs.

Yakey Yake Brady was also the uncle of another later gang boss, Richard “Peg Leg” Lonergan, who was the last boss of the White Hand Gang, Lonergan died late on Christmas night, early St. Stephens (Boxing Day) morning in a shootout at the Adonis Social Club, Al Capone would be arrested along with a few others over the murders but released without charge.