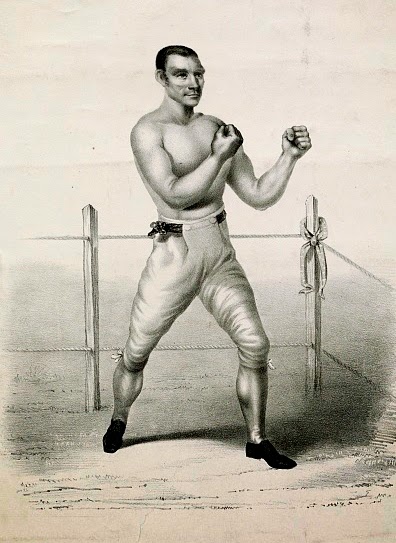 Yankee Sullivan real name James Ambrose. he was born in Bandon, Cork in 1811, he was also known as Frank Murray and James Sullivan.

Yankee Sullivan was a bare-knuckle boxer and was a prizefighting champion from 1851 to 1853. He was considered to be the inheritor of another prizefighters title, Tom Hyer but he lost that title after losing a fight to John Morrissey.

Yankee Sullivan was born in County Cork, Ireland in 1811 but he grew up in London ‘s East End and became a prizefighter at an early age. After being involved in crime he was sentenced to twenty years jail and sent to Australia, as it was a penal colony at the time, many criminals were sent to Australia.

Having served eight years he was granted leave and settled in the Rocks area of Sydney, which was considered the most dangerous waterfront in the world. He soon went back to his criminal ways and established a gang known as the Sydney Ducks who were known to terrorize, wound, and rob any person who crossed their paths or who had a heavy purse. Drunken Sailors, Red Coats, and gentlemen were their favored targets. (More about them another time)

Sometime in the 1840’s Sullivan arrived in New York and became a prizefighter, political enforcer and fight promoter. One fight he promoted would leave a man dead and Sullivan in jail. The fight between Christopher Lilly & Thomas McCoy, McCoy died. Sullivan did receive a pardon after two years on the agreement that he would not fight for two years & that two people could pay two hundred dollars to have him released.

After an eventful build up to the fight between Yankee Sullivan & Tom Hyer they eventually fought in 1851. The ring was put together on the spot with the ropes made from ships ropes and the corners from wood. Boxing in the 1800’s didnt have three minute rounds, a round usually finished when one fell on the ground. Sullivan was knocked out after eighteen minutes and taken unconscious to an area hospital. 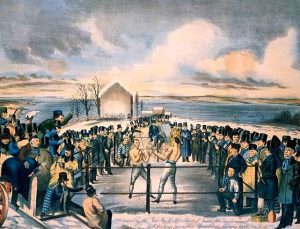 Following the fight Hyer retired temporarily. Sullivan claimed Hyer’s status as the champion as his own on the dubious grounds that Hyer was a champion, Sullivan’s only loss was to Hyer, Hyer had retired and therefore Sullivan inherited the Championship on the basis of being a fighter second only to the retired Hyer.

In 1853, Sullivan fought John Morrissey at Boston Corner, Massachusetts out of reach of the authorities and a good location for the illegal boxing matches. Sullivan was the dominant fighter for the first ten rounds but wore down as fight went on, and was taking a serious beating by the thirty seventh round. The fight broke into a brawl involving Sullivan and both fighters’ trainers. Morrissey stayed out of the fight and was given the winners money (two thousand dollars) as a result and claimed the title as champion. Not everyone would accept this claim, Morrissey would later have to fight Bill The Butcher Poole, this fight would lead to the death of Bill The Butcher. See here for that story

After he retired from boxing Sullivan moved to California where he was employment as a “shoulder striker” guarding ballot boxes to deter supporters of candidates from casting their vote. He was the guard over a ballot box that was tampered with, resulting in the election of James P. Casey to a city office, despite Casey having not even appeared on the ballot.

On May 25, 1856 Sullivan was arrested after a crackdown on criminals. A trial was held and Sullivan sentenced to deportation. While in jail he confessed his involvement in ballot box tampering. After four days in jail, he was found with his wrist slit, apparently having committed suicide, although reports suggested for years afterwards that he had been murdered by individuals who were worried that Sullivan confess what he knew about political corruption.

Portrait was drawn in 1846 by George Beach