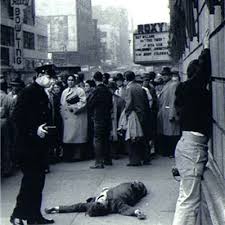 A young Mickey Spillane, lying on the sidewalk, having been shot by police in an attempted robbery of the Roxy Theater in 1952. After hospitalization Mickey Spillane would be sentenced to four years in prison.

Known as the Last Gentleman Gangster, Spillane would rule over Hell’s Kitchen throughout the 60′ & 70’s.

Mickey Spillane would marry Maureen McManus, part of the McManus family who were tied into Tammany Hall, New Yorks political machine, that had a long history of corruption.

To this day the Spillane’s are still very much part of Hell’s Kitchen, though it’s now gentrified and not anything like it used to be. The family own Mickey Spillane’s bar, and the old 596 bar, which was once owned by his enemy, Jimmy Coonan.