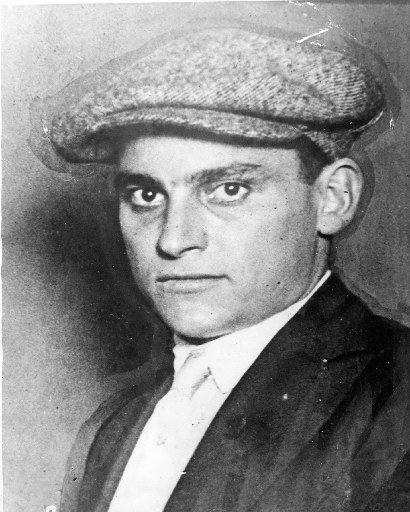 Also brought in for questioning in relation to the murder of Dean O’Banion was Angelo Genna better known as Bloody Angelo. Angelo was one of the prime suspects in the murder.

Based in Chicago’s Little Italy, Angelo Genna and his brothers Sam, Peter, Michael, Tony & James. Angelo, Michael and Tony were considered to be the top three in the group. The Genna’s were bootleggers during the Prohibition Era, they had obtained a license to make alcohol legally but sold it illegally, selling their extra alcohol at cut-rate prices outside of their territory, which happened to be mostly the North Side Gang’s territory.

From Left to Right: Sam Genna holds his daughter Mary next to his wife Vitina; Angelo Genna is seated next to Anthony, the son of Peter Genna who sits to his right; next is Tony Genna; followed by James’s wife; and finally by their host, James Genna. The missing Terrible Genna is Mike, presumably he took the picture.

The Gennas were hated enemies of the North Side Gang, Dean O’Banions gang and they would clash with them periodically throughout the Prohibition Era. However, Angelo and his brothers were tied to John Torrio & Al Capone as allies and also the fact that Torrio and Capone were buying sugar from them to use in their beer.

O’Banion had gone to Johnny Torrio & Mike Merlo, the president of Unione Siciliana, to ask them to tell the Genna’s to keep their alcohol out of the North Side, this request was refused so O’Banion and his gang began hijacking the Genna’s booze as it passed through their territory. Another flashpoint between O’Banion and the Genna’s was due to debts owed.

O’Banion had bought into The Ship casino, one night as O’Banion was sitting with Al Capone, Frank Maritote, Frank Rio, Hymie and Schemer Drucci as they were dividing the gambling proceeds, Al Capone remarked that Angelo Genna had lost heavy that week, around $30,000, Capone suggested that it be forgotten about as a sign of goodwill. O’Banion didnt take kindly to this and found a phone to ring Angelo Genna and berate him and demand the money be paid in full by the end of the week.

While being questioned, Angelo Genna denied any knowledge of O’Banion’s murder, the police unable to link Genna to the murder let him go.

“Bloody” Angelo Genna was blasted to death by the North Side Gang, Bugs Moran, Schemer Drucci and Hymie Weiss in a high spped car chase, possibly for revenge for the Dean O’Banion murder. Angelo Genna was brought to hospital with his wounds and died later.