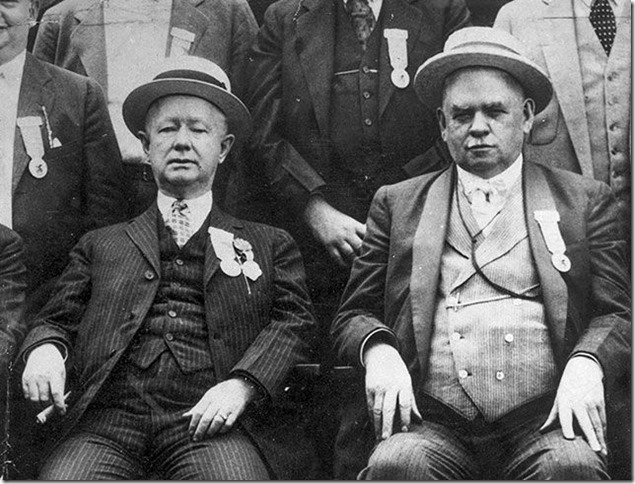 The cast of characters in the Levee included all sorts of thieves, swindlers, grifters, grafters, chancers, bag men, influence peddlers and other types of skimmers, scammers and hangers-on with their hands out or in somebody else’s pocket. And then there were the criminals.

“Hinky Dink” Kenna and “Bathhouse” John Coughlin were practitioners of “honest graft” the corrupt practice of taking a cut of the city’s money they helped get for improvements like paving roads, building bridges, cleaning the streets, hiring cops and teachers. The work was almost always done on the cheap with shoddy materials and workmanship with contracts going to their cronies, family, friends etc.

“Hinky Dink” Kenna was described a poker-faced little man who ran the Workingman’s Exchange, a saloon and gambling den that became the headquarters of his First Ward political organization. In return for a cut of the action, he arranged police protection for the pimps and saloon keepers, and in return for votes on Election Day found tramps a place to flop.

“Bathhouse” John Coughlin was a masseur at the Turkish baths. He was known for his elocution and unique dishabille—he wore Prince Albert coats of billiard-cloth green, plaid and mauve vests, lavender trousers, pink kid gloves, and gleaming yellow pumps.

Kenna and Coughlin were a team, and ran the First Wards politics for almost 50 years