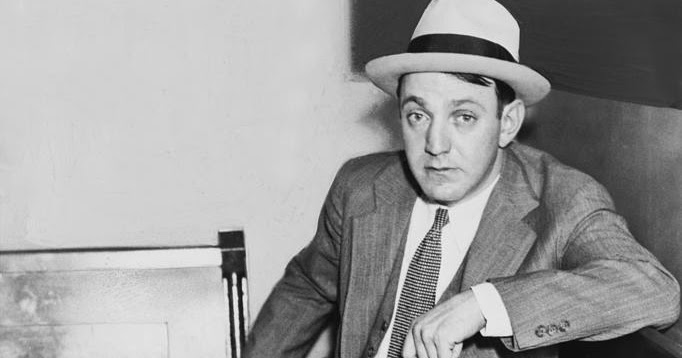 Arthur Flegenheimer or the Dutchman but best known as Dutch Schultz is one of the more recognizable faces from the Prohibition Era, was a bootlegger, racketeer and mobster during the 1920’s & 30’s.

Schultz came to the attention of a Bronx nightclub owner, Joey Noe during the 1920’s at The Hub social club. Joey Noe admired Schultz’s reputation and they soon became partners and opened more illegal speakeasies in the Bronx.

The Noe / Schultz operation soon expanded over to Manhattan, which brought them into conflict with other mobsters, including Jack “Legs” Diamond  On October 16, 1928 Joey Noe was shot several times outside the Chateau Madrid, a speakeasy at 231 West 54th. Noe seriously wounded, his wounds became infected and he died on November 21. In retaliation on October 12, 1930, Legs Diamond was shot and wounded at the Hotel Monticello on Manhattan’s West Side. Two gunmen forced their way into Diamond’s room and shot him five times before fleeing. Diamond would recover from his wounds but would survive many more assassination attempts, prompting Schultz to say “Ain’t there nobody that can shoot this guy so he don’t bounce back?” Diamond would himself declare “The bullet hasnt been made that can kill “Legs” Diamond” However “Legs” Diamond would be killed on December 18, 1931, two men entered the room he was staying in and shot him 3 times in the head.

“Legs” Diamond wasnt the only Irish mobster had trouble with, there was trouble brewing within his own organization, Vincent “Mad Dog” Coll, a young enforcer and assassin for the Schultz gang was becoming unhappy and the pair eventually fell out over Coll robbing a dairy in the Bronx of $17,000 without Schultz’s permission. Vincent Coll left, formed his own gang, and went into business for himself in early 1931. Coll’s new gang and Schultz’s mob engaged in a bloody battle, which would leaves bodies all over New York, In May 1931, Schultz’s mob killed Coll’s brother Peter, Coll responded by going on a rampage – in the next three weeks he gunned down four of Schultz’s men.

As the gang war wore on and the bodies mounted, Schultz became nervous, its said that the only person to have given Schultz the jitters was “Mad Dog” Coll, so much so that Schultz even moved out of his home to a safe house, a luxurious apartment on 5th Avenue under the name Russell Jones.

Assuming they were Vincent Coll gangsters there to take him out, Schultz and Iamascia drew pistols and charged at the men. Their targets turned out to be New York City Police Detectives Julius Salke and Stephen DiRosa. Seeing their approach, Salke shouted, “We are the law!” Schultz responded by spinning about, tossing his weapon in the street and attempting to escape. Salke fired a shot into the air, convincing Schultz to surrender. Iamascia was slower to respond, and it cost him his life. As he continued to advance, Detective DiRosa fired a shot into his midsection, he died later in hospital.

The detectives, working on a tip-off earlier in the day were staking out the apartment of Mr. Russell Jones, Schultz was relieved to find that they were detectives and not a Coll hit squad. “Jesus, I’m glad youre cops, for a minute, I thought you was the opposition, out to gimme the works” Schultz said. Vincent Coll was gunned down with a Tommy Gun while he was on the telephone in a phone booth, Schultz lived on.

As Prohibition ended, Schultz’s main source of income would come from racketeering and extortion. He would become a target of the authorities and specifically U.S. Attorney Thomas Dewey who would go after him for non payment of taxes, Schultz would be brought to trial and convicted but won an appeal, the case went for a retrial, which Schultz was acquitted, however, he left New York and moved to Newark, New Jersey. Schultz’s troubles with Thomas Dewey became so great that he went before The Commission, the ruling body of the Mafia, to seek permission to kill Dewey, Joe Bonanno, a boss called the idea insane, The Commission refused Schultz request which enraged Schultz, he swore he would kill Dewey anyway. As a result Schultz had to be taken care of.

Dutch Schultz was shot on October 23, 1935 while he was in the Palace Chop House restaurant at 12 East Park Street in Newark, New Jersey. While Schultz was in the bathroom, two Murder, Inc. hitmen, Charles “The Bug” Workman and Emanuel “Mendy” Weiss, entered the establishment. Witnesses say Schultz staggered out of the bathroom, clutching his side, and sat at his table. He called for anyone who could hear him to get an ambulance. Schultz lingered for 22 hours, speaking in various states of lucidity with his wife, mother, a priest, police, and hospital staff, before dying of peritonitis.