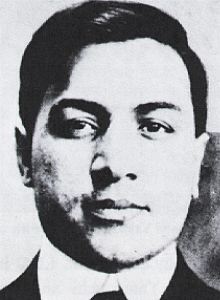 Francesco Ioele / Uale, best known as Frankie Yale came to the US with his family around 1900. As a teenager, Frankie Yale became friends with John Torrio, who introduced him to the James Street Gang, which was an offshoot of the notorious Five Points Gang.

Frankie Yale was one of the new generation of gangsters who believed in putting business ahead of ego. The gang became a Mafia style “family” which included Italians from all regions and could work in partnership with other ethnic groups if it was good for business. Yale’s gang engaged in Black Hand extortion activities .

Yale had a long history with some other well known gangsters at the time, Al Capone being one of them. Frankie Yale owned the Harvard Inn near Coney Island and a young bouncer named Al Capone worked there. The Harvard Inn is where Capone got his famous scars and nickname, Scarface, in a dispute with Frank Galluccio, Capone had insulted Galluccio’s sister. After two years working in Yale’s, Capone went to Chicago by Yale, and joined John Torrio’s organization, The Chicago Outfit.

Frankie Yale also and a history with the Irish gangs in Brooklyn, especially the White Hand Gang. Garry Barry, a member of the White Hand Gang, was suspected in attempt on Yale’s life on February 6, 1921, Yale and two of his men were ambushed in Lower Manhattan after they stepped from their car. One of Yale’s bodyguards was killed and the other wounded, with Yale himself sustaining a severe lung wound. Yale pulled through after an extended recovery.

In another famous hit that involved Yale was the murder of Dean O’Bannion. After a long running dispute with John Torrio and Al Capone, Dean O’Bannion was marked for death. On November 10, 1924,  Frankie Yale, and allegedly John Scalise, and Albert Anselmi entered Schofield’s Flower Shop, where O’Bannion was arranging flowers for mobster Mike Merlo’s funeral and killed him. Yale shook O’Bannions hand while the two gunmen shot him, the famous Death Grip.

Frankie Yales downfall came on July 1, 1928, Yale was in his Sunrise Club, located at 14th Avenue and 65th Street, when he received a cryptic phone call. Yale dashed out to his Lincoln coupe and drove up New Utrecht Avenue, where a Buick sedan carrying four armed individuals stopped next to him. After a chase up New Utrecht, Yale swerved west onto 44th Street, with the chasing car close behind. Yale’s car was soon overtaken and the occupants opened fire at close range, with a shotgun and a submachine gun. Yale’s Lincoln was fashioned with armor plating, however the dealer never bullet-proofed the windows. The now out-of-control Lincoln veered to the right, hopped the curb, and crashed into the stoop of a brownstone house.