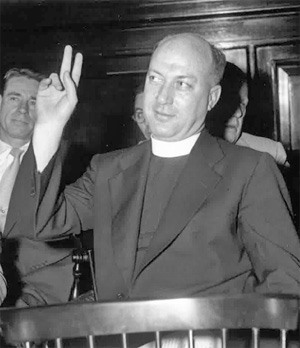 Father John Corridan, was a priest from New York who gave his support to the members of the International Longshoremans Association and showed amazing courage in standing up to the mobs who ruled over the Westside Docks in the Port of New York.

His main focus of the waterfront began by focusing on the “shape up” system, a practice that allowed the docks foremen pick out who they wanted to work each day, this system was open to corruption, for example foremen taking kickbacks from people who could pay them to be picked.

Father Corridan played a central role in shining the light on the crime and practices that were rampant on the piers, helped by a journalist form the New York Sun, Malcolm Johnson who wrote and published an expose, which in turn led to the Waterfront Commission being set up.