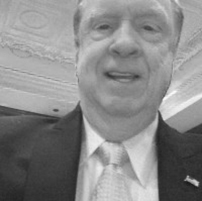 One of the original members of Joe Coffey’s Coffey Gang, Frank McDarby was one of NYPD’s finest with a long and storied career. Frank McDarby joined Joe Coffey’s Organized Crime Homicide Task Force from the NYPD’s Anti – Terror Squad, one of eight members which included some of the best detectives from the NYPD, including Kenny McCabe, John McGlynn and Jack Cahill.

When forming the taskforce Coffey chose Irishmen such as Frank McDarby and Joe McGlynn, both of whom could be described as versions of Coffey himself. In addition to their heritage, all three were tall (well over six feet), tough, no-bullshit detectives. When grouped together they reportedly looked more like NFL linebackers than cops.

McDarby was part of the team that brought down the Westie’s Gang from Hell’s Kitchen, he said, “We were sitting in a Second Avenue Bar, Joe Coffey, Jack Cahill and myself.” A man came up to the three police officers and told them a story about an unsolved murder in Hell’s Kitchen. The officers got to talking about the Westies and decided to take a further look. “We went to look at one homicide case,” said McDarby, “and we saw about a dozen with nothing being done about them. So we started.”

There was one bar in particular that caught the eye of McDarby & Joe Coffey, the Sunbrite Bar, it was where the Westies hacked the bodies of murder victims to pieces for disposal. “You know how many people were killed in that bar?” McDarby said. “A lot.” T.J. English, author of The Westies mentions, “Eddie Cummiskey owned the Sunbrite Saloon and brought the whole dismemberment thing to the neighborhood,”. “They would bleed bodies, We were really puzzled,” McDarby said. “What’s with this bleeding of bodies?

Eventually, The Westies imploded and Mickey Featherstone was eventually arrested and was serving time in Riker’s Island. Once in Rikers, Featherstone was rearrested by McDarby, based on new evidence. “We had him by the balls,” recounted McDarby. However, Frank McDarby had retired from the police force by the time The Westies were sent to prison.

Frank McDarby also had an encounter with another famous cop, Steven Caracappa, one half of the Mafia Cops, along with his partner Louis Eppolito. The Mafia Cops were both charged with 10 murders, they had being working as murder for hire to Lucchesse Crime Family’s Anthony “Gaspipe” Casso and had murder or kidnapped people on Casso’s behalf for vast sums of money. Steven Caracappa in particular was a top detective, who had practically written the book on organized crime. “He was a methodical guy, very quiet, but he never stopped – if he targeted you, he never stopped until he got everything,” said his ex-partner Frank McDarby.

After McDarby retired from the NYPD and the Coffey Gang he moved into private detective work and continued to work with Joe Coffey, after Coffey had retired from the NYPD. In one such case, both McDarby and Coffey traveled to Houston, Texas, a real estate company had been losing money, they believed the money was being taken by staff. Posing as potential clients, McDarby and Coffey visited the offices of the real estate company and immediately noticed huge cocaine use among the staff, which accounted for the loss of sales and missing money, both of them disappointed that they solved the case so quickly.

Frank McDarby also had a charitable side and was respected within the Irish American community, it was his work with the Project Children charity. Project Children was set up by another NYPD officer, Denis Mulcahy, the goal of Project Children was to arrange visas, insurance, passports and charter flights to bring the young victims of Northern Irelands sectarian strife during “The Troubles” to the United States for six-week summer vacations. Project Children began in 1975, more than 3,000 children, ages 9 to 16, from Belfast, Derry and other violence-ridden Northern Ireland towns, have been treated to a holiday from hatred with host families in New York, New Jersey, Connecticut, Pennsylvania, Ohio, North Carolina and South Carolina. Now similar programs bring children to Colorado and California.